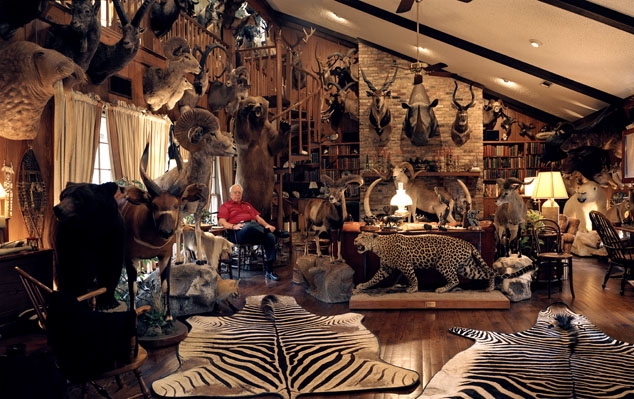 Slate has a short piece today on David Chancellor, a South Africa-based photographer who recently published Hunters, a book about exactly what it sounds like. In it, the photos follow big-game hunters across southern Africa, but also to Dallas:

To complete the cycle, Chancellor wanted to photograph the trophy rooms of the more seasoned hunters and spent time in Dallas with members of the Dallas Safari Club.

“I found myself documenting these guys who say they’ve hunted for 25 years and want to hunt a leopard or lion, and I photographed them … but at best what I’ll produce from that hunt is an individual with a lion … the only way (to complete the book) was to go back to where he actually has all of his trophies and produce a portrait that would complete the task, to show his entire career in one portrait,” Chancellor said.

Chancellor worked with the most decorated members of the Dallas Safari Club—the recipients of the “Outstanding Hunting Achievement Award.” Their achievements are based on both quantity and quality of animals killed both by animal groupings—such as the big five (elephant, cape buffalo, rhino, lion, and leopard)—and also by animal species.

“Harvesting is how they refer to hunting” Chancellor said. “They’ve already gone for the big five, and now they want every spiral horned antelope … and they spend a considerable amount of time and money going after that.”

“The flip side of the trophy rooms in Dallas—but in some ways essentially the same side of the same coin—are the African communities who benefit by taking the meat from the killed animals as well as a large percentage of the high fees the hunters pay to go on the hunts” Chancellor said.