Chris Kyle’s death seems to confirm that “he who lives by the sword dies by the sword.” Treating PTSD at a firing range doesn’t make sense

Ron Paul may be be a doctor, but just because he’s an outspoken, politically inclined OB-GYN doesn’t mean he know what he’s talking about when it comes to the latest emotional – and deadly – case of PTSD…

…Ron Paul is, to put it plainly, flatly wrong in his assertion that “treating” someone with PTSD at a shooting range is a bad idea. First of all, not everyone with PTSD is a dangerous threat to your life. But, further to the point, Prolonged Exposure Therapy (PET) is one of the leading ways to treat PTSD, as one commenter pointed out to Paul. It’s even endorsed by the U.S. Department of Veterans Affairs. They call it “one of the most effective treatments” of PTSD.

Paul was immediately excoriated. A sampling: 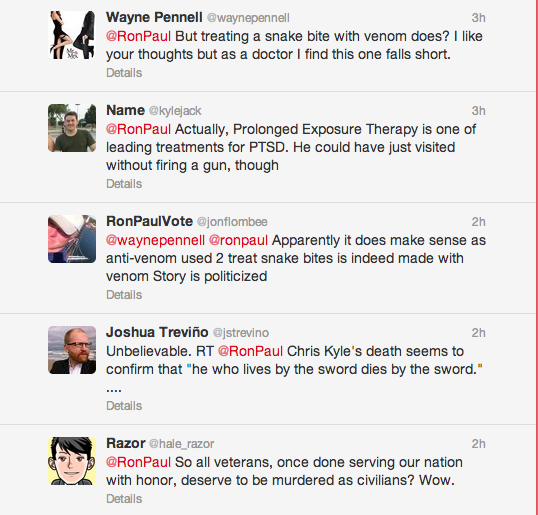 Eddie Routh was arrested for killing Kyle and another man, Chris Littlefield.