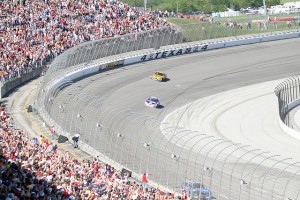 Texas Motor Speedway has banned smoking in the grandstands for the 2013 season, and slashed ticket prices on 15,000 seats, the track announced Monday. The move comes a year after the track had the highest-attended Nascar event of the season, the Samsung Mobile 500; the event drew 159,000 spectators.

“We drew the biggest crowd of 2012, so it runs against the thought of how you do business with the free enterprise system,” Speedway president Eddie Gossage told the Star-Telegram. “If you’re selling out or doing well, you raise prices….But the best way to show you’re fan friendly is to lower your prices.”

Gossage also announced Monday theÂ eliminationÂ of smoking in the grandstands; it will still be allowed in designated concourse areas. The track is also unveiling bacon cotton candy this season, so maybe the whole no-smoking-for-your-health thing is just a wash.