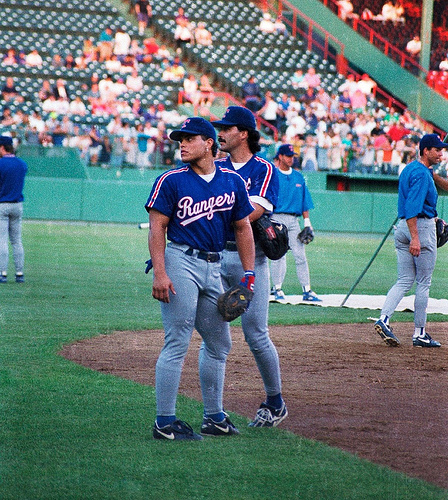 One of these men will make the Hall of Fame. One of them will not. Source: NJ Baseball
Chris McGathey

No one was elected to the Baseball Hall of Fame today, but six former Texas Rangers received votes. It’s almost impossible that any of them will ever get in.

Players need to be on 75 percent of voters’ ballots to be enshrined; former Houston Astro Craig Biggio was the closest this year, with 68.2 percent. The Baseball Writer’s Association of America (BBWAA, taking a page from Grapevine’s book) had to deal with three (alleged) steroid-users facing the ballot for the first time this season: Roger Clemens, Barry Bonds, and Sammy Sosa. None received more than 38 percent of the vote. The former Rangers, their vote percentage, and why they won’t ever get in:

The Texas Rangers’ Jurickson Profar is the Best Prospect in Baseball, According to ESPN