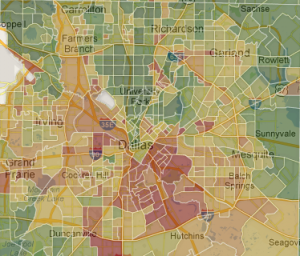 Okay, that’s a little sensational, but it’s not far off. Rich Blocks, Poor Blocks lets users zoom in on any city in America and look at the median household income, per census tract. It’s pretty basic information, and the Dallas map (right) doesn’t tell us anything we don’t already know. It is startling to see, however, how one of the city’s most affluent tracts (17.01, in the Arts District, with a median household income of $107,500) sits only one tract away from one of its poorest tracts (203, in and around Fair Park, where the median is $14,060). Peek around a bit.