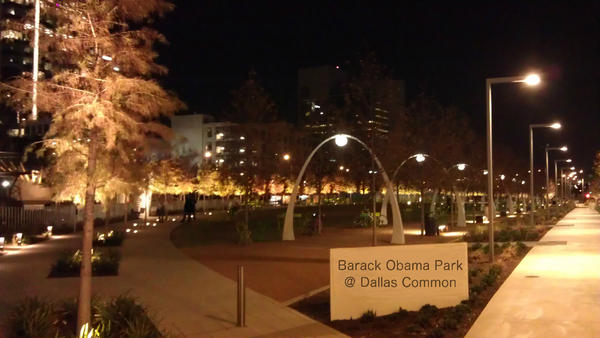 Earlier this week, it came to our attention that some folks were trying to change the name of Klyde Warren Park to “Barack Obama Park.” Their web presence was scant, but I found them. Here’s an interview with spokesman Dirk D. Dazzler. This is very, very real. Uncomfortably real.

me: morning, Mr. Dazzler
Dirk: Greetings
me: Dazzler: is that German?
Dirk: It is not. But my first and middle name (Die) are. Dazzler is a bit of a fun alias for online presence.
me: of course
Â  Â  Â  Â  Â off the bat: Why are you so mad at tiny Klyde Warren?
Â  Â  Â  Â  Â he’s just a boy, with a multi-million dollar park
Dirk: First, I am just the messenger, doing PR work. But I do know the thoughts and feelings of the people behind The BOP movement, and they believe the park over Woodall shld have been named something else. The only people they are disappointed with are the people that gave final okay to naming the park after one donor’s child.
me: fair enough
Â  Â  Â  Â  Â you will not be shot, messenger
Â  Â  Â  Â  Â but isn’t that how things get named?
Â  Â  Â  Â  Â people donate a lot of money, and that’s their reward
Dirk: Certainly not always the case. May I ask your background, briefly?
me: German, with English and Russian bits
Â  Â  Â  Â  Â  I’m also a reporter
Dirk: not ethinic
Â  Â  Â  Â  Â  Â  Â your upbringing and education, and places lived\
Â  Â  Â  Â  Â  Â  Â relevant to discussion possibly
me: ah
Â  Â  Â  Â  Â New York, Philly, DC, Baltimore
Â  Â  Â  Â  Â the places I’ve lived, grown up
Â  Â  Â  Â  Â you?
Dirk: I was born in Germany. Spent most of youth there before moving Stateside. Lived in Dallas first, then Philly, NYC nad a few other places. Now Split time between Dallas and BErlin.
Â  Â  Â  Â  Â  Â  Sorry for slow typing. Just got back from gymnasium.
me: no worries, gotta stay swole
Â  Â  Â  Â  Â  I get it
Â  Â  Â  Â  Â so have you been to the park much?
Â  Â  Â  Â  Â what are your thoughts?
Dirk: I’m in Berlin at the moment. Shld be back in Dallas this wknd.
Â  Â  Â  Â  Â  Â  Â I have been to park. Apart from the name, the short answer: Initial disappoint first visit bc of lack of green space. The second and subsequent visits I kinda came around. Think they might have done as good a job possible given small space. Need to expand over access roads in future.
me: quick thought: double-decker deck park
Â  Â  Â  Â  Â  that way Klyde gets to keep his, and Barack Obama gets his own
Dirk: Interesting
Â  Â  Â  Â  Â  Â  What do you think of Ping Pong Park?
Â  Â  Â  Â  Â  Â  PPP @ Dallas Common
me: maybe the Barack Obama one could be clear, so the sunlight still get to KWP
Dirk: That would certainly be innovative
me: I think we might have just solved this riddle, brother
Dirk: On a serious note, my employers support the name Dallas Common for the general area. The small park that is there now will be subsumed by bigger park soon.
me: serious note, too:
Â  Â  Â  Â  Â how much of this is serious? And who are your employers?
Dirk: The ideas and principles underlying cause are very serious. My employers wish to remain anonymous at this point.
me: fair enough
Â  Â  Â  Â  Â so what’s the next step here?
Dirk: My backers and I believe the current name is terrible. Embarrassing for everyone. In Dallas.
Â  Â  Â  Â  Â  Â  Â Not sure.
me: and why Barack Obama Park?
Â  Â  Â  Â  Â Why not name it after someone in Dallas?
Dirk: Well,I thinkt he Stimulus money adn government funds initially influenced the choice of BOP. But the longer term solution is probably a Dallas civic leader.
me: Dirk Nowitzki Park
Â  Â  Â  Â  Â  Larry Hagman Park
Dirk: Better than a child
me: That Girl From Most Eligible Dallas Park
Â  Â  Â  Â  Â will your employers petition the city, or just let the grassroots grow?
Dirk: Uncertain. Grassroots is certainly part of equation. And the People are the ones who will drive this. Some have even suggested calling it The People’s Park
me: sounds like commie nonsense
Dirk: The city is incompetent in so many ways that I’m not sure going through them will accomplish much.
Â  Â  Â  Â  Â  Â  Â Not at all commie nonsense. So many people are confused by terms like Socialism and Communism these days because irresponsible media misinform the people. Sad really, but that is a discussion for another day.
me: yes, one probably better saved for another day
Â  Â  Â  Â  Â well, Dirk
Â  Â  Â  Â  Â keep us in the loop
Dirk: The Loop will not be televised. But hoepfully we’ll get this thing corrected.
me: you’re starting to sound like Bane now, Dirk
Â  Â  Â  Â  Â and a warning: Klyde’s probably gonna be pretty sad over all this
Dirk: What is Bane?
me: a conversation for another day
Dirk: I hope they don’t get sad. I do hope they change name tho.
Â  Â  Â  Â  Â  Â  The takeaway from The BOP facebook page and twitter acct are that the park needs a new name. My backers like the name Dallas Common, and are open to other suggestions. They do, however, want Dallas to grow up.
me: a fine point to end on
Â  Â  Â  Â  thanks for your time, Dirk
Dirk: Danke fur your time