As Krista mentioned in Leading Off this morning, the Museum Tower’s owners (aka the Dallas Police and Fire Pension System) have told us what they think of the Nasher’s proposed fix of the problems created by the heat and light reflecting off the tower. In short: the pension fund says the retractable louvers won’t work. I’ve put in some calls this morning to talk to people who can provide perspective. I doubt, given the Thanksgiving break, that I’ll hear back from those people today. Too, we are on deadline for our January issue. Hopefully by Monday I’ll have some more information for you. Till then, here are a couple points to consider:

WIND: Museum Tower’s owners say the louvers won’t work because they can’t operate in high winds. They say the manufacturer tells them that the louvers can’t tolerate winds higher than 53 mph, and the National Weather Service last year recorded in North Texas 29 days with wind speeds that reached between 50 and 80 mph. Rick del Monte, the Beck architect who is consulting for the Nasher, took wind speed measurements for a week at three spots on Museum Tower. The average speed was 20 mph; gusts never exceeded 30 mph. Okay, fine, that was just one week. Let’s roll with the extreme numbers from Museum Tower. Listen, a category 1 hurricane has winds of 74 mph. If we’re experiencing 80-mph winds, we’re getting hammered by a serious storm — a storm that might happen during nighttime hours. If it’s storming, the sun won’t be out. The louvers would already be rolled up, into a safe position. Same thing at night. The louvers would be rolled up. So of those 29 days with high winds, let’s say half of them aren’t storm related. Let’s say we’ve got 15 sunny days when the wind blows like mad in Dallas. Fine. Roll up the louvers on those days. They will do it automatically. The Nasher can handle 15 days of reflected light and heat. What it can’t take is the current year-round assault. The wind thing is a bogus objection, and the owners of Museum Tower know it.

WATER: Museum Tower’s owners say that retrofitting their building with the louver system would “create more than 20,000 holes in the current water-tight exterior glass wall system.” Rick del Monte told me last week that the building almost looks like it was originally designed to have the louver system installed. The statement from Museum Tower makes it sound like retrofitting the building would require drilling holes in the glass. That’s not the case. Look at these two illustrations. 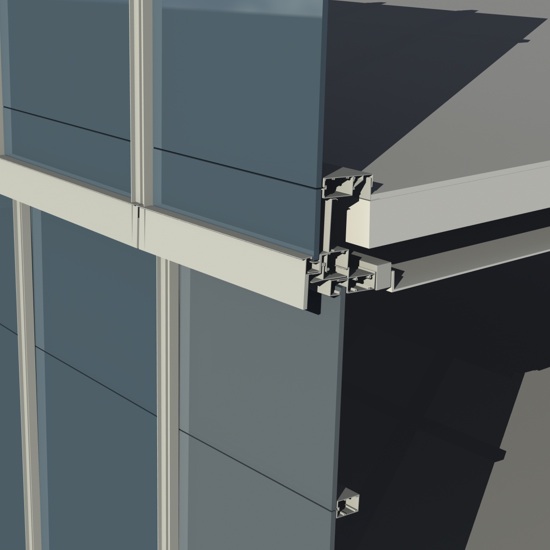 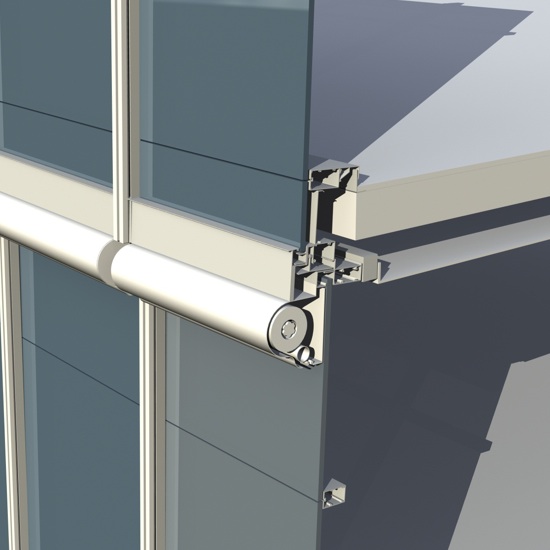 On the left, you see the facade as it exists now. Notice the flange that overhangs the glass? On the right, you can see how the rolled-up louver system fits under that flange. The strongest part of the building would support the louvers, and no holes need to be drilled in the glass. I’m not an engineer, but I don’t see how retrofitting the building would compromise its water tightness.

IMPAIRED VIEW: Museum Tower’s owners say that the louvers, when rolled down, would ruin the views that luxury condo owners would be paying for. Honestly, I don’t know whether they would or not. I suspect they wouldn’t. But unless you’ve traveled to Germany and visited the Hegau Tower, where the louvers have been installed, you can’t offer an opinion. Have a look at these images: 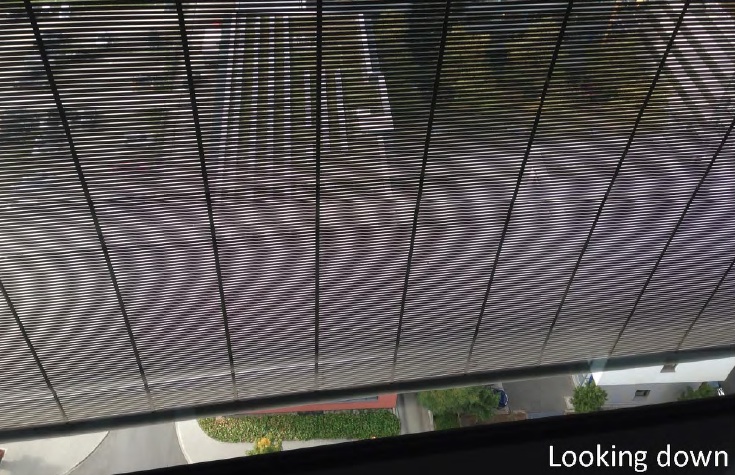 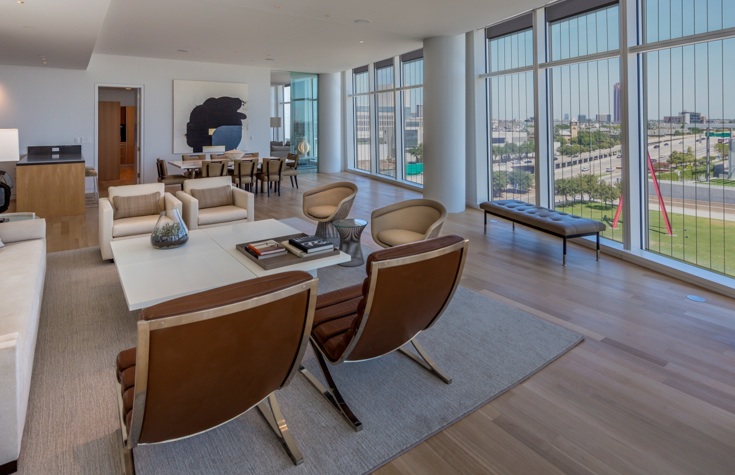 The top image is provided by Museum Tower’s owners. It was taken inside Hegau Tower. Looks horrible, right? But every smart person knows how a camera works. By adjusting the focus and exposure, you can make that image look like a disaster, or you can make it look tolerable. The bottom image is provided by the Nasher. The picture was taken in the Museum Tower’s show unit, and the deployed louvers were added in digitally by the Nasher’s consultant, architect Rick del Monte. Looks great, right? But every smart person knows how computers work. Here’s the thing, though: it doesn’t matter. The truth probably lies somewhere between these two images. But however the louvers look when deployed, they’ll only be deployed on any given window for an hour or two during the day. As the sun moves through the sky, the louvers are programmed to track its movement. Up and down they go. Actually, here’s the question Museum Tower’s owners should be asking: what do those louver motors sound like when they’re rolling the things up and down? But the visibility issue? That’s not a problem. And, again, Museum Tower’s owners know that.

Okay, one more thing. Then I’ve got to go. Seriously. If your January issue arrives late to your mailbox, you’ll know why.

Here is the statement made by Museum Tower’s owners in connection with their analysis of the louvers. I’ve highlighted the parts I want you to pay attention to.

Museum Tower has had numerous conversations with the Nasher’s consultants and had requested today’s meeting to report on its findings. Museum Tower representatives reviewed German louver manufacturer Clauss Markisen’s technical data, engineering reports and wind tunnel test data. In addition, Museum Tower representatives inspected a building in Singen, Germany with a similar louver system. The manufacturer’s representative, Richard Wilson, said “Clauss Markisen has confirmed that they have not installed the system on a building as tall as the Museum Tower.” A complete study, modeling, engineering, testing, manufacturing and installation will take about two years.

Today’s cancelled meeting was to be an important discussion of the difficult, complex issues related to attaching a louver system to a 42-story building that has already been built. We would hope that the sophisticated, knowledgeable citizens of Dallas, who are commenting without benefit of any technical information specific to Museum Tower, would realize that it takes many months to study and test a project of this scale. Museum Tower’s technical team has worked in good faith to study the louver system and find a viable solution since Mr. del Monte’s proposal.

That last phrasing — “repeatedly engaged in communications designed to harm” — is the telegraph that a lawsuit is coming. Make no mistake. Museum Tower can’t sell units right now. Last number I saw was 15 units sold. The pension fund is going to place blame for that failure squarely on the Nasher. It will be one of the most amazing things in the history of amazing things when it happens. A building goes up, and it destroys a museum. Then the owners of the building sue the museum because that destruction makes it impossible to sell condos. It will be amazing when the lawsuit is filed, but it shouldn’t surprise you.

Now then. Let’s look at why David Haemisegger cancelled that meeting, shall we? In response to that statement from the owners of Museum Tower, the Nasher released its own statement:

In the media statement released by the leadership of Museum Tower today they falsely accused the Nasher of cancelling an important meeting scheduled one month ago. Yesterday afternoon Richard Tettamant contacted David Haemisegger to request a stop-by visit with one of the Tower’s architects who was in town from Los Angeles. Mr. Haemisegger learned last evening from a member of the media that the Tower leadership intended to make a media statement and release a report following this meeting today. Mr. Haemisegger then cancelled the impromptu meeting when it was clear that Museum Tower was working publicity stunts rather than working on solutions to the problems they have created for the Arts District. In their telephone conversation last evening, Mr. Tettamant claimed to have no knowledge that a report was to be issued by Museum Tower.

For 14 months we have maintained open and honest communication and will continue to do so. But we call upon the leadership of Museum Tower to work in good faith and recognize their responsibility to the community.

Richard Tettamant and Museum Tower’s owners have engaged in such publicity stunts all along. Let me take you back to October, when the two sides were supposedly engaged in talks mediated by lawyer Tom Luce, who had imposed a media blackout. In the midst of this media blackout, Tettamant moved a pension fund board meeting to the Nasher, showing up unannounced and with DMN reporters tagging along. It was a public meeting. Get it? So of course reporters could be there. And Tettamant trotted out a UTD professor who had a great quote for the reporters during this media blackout. From the DMN:

“If the oculi are reoriented, you are still able to see blue sky and you exclude reflected light from Museum Tower and any future high-rise building built in that area,” Cy Cantrell, a professor and photonics expert at the University of Texas at Dallas, told trustees. Cantrell called claims that reflected light and heat from the tower were ruining grass and other plantings in the Nasher garden “pure bunk and pseudoscience” as well as “sheer nonsense.”

Cy Cantrell is a smart guy. Dude did undergrad at Harvard and got a master’s and Ph.D. at Princeton. He has worked at the Los Alamos National Laboratory. But he’s a photonics expert. What the hell is photonics? Lasers, fiber optics, signal processing, data transmission. Check out his UTD page, where he says his current research projects are “mostly computational.” Cy Cantrell is not an architect. He’s not a guy who works with sunlight bouncing off buildings. And he’s certainly not a botanist. How is he qualified to disagree with the Nasher’s horticulturist, Robert Moon, who says that the heat reflected off Museum Tower is harming the Nasher’s plantings? Interesting trivia about Moon: UTD is working on a huge expansion plan that will take it through the year 2050. Moon is the horticulturist on the project.

Really. My head is about to explode.