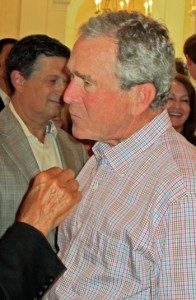 square-foot estate — the priciest spread in Big D — backs up, literally, to Hicks pal George W. Bush’s place. So the former president didn’t have far to go Sunday afternoon for an event at Hicks’ home that raised money for the Global Health Corps. GHC is a nonprofit outfit promoting “health equity,” co-founded by Laura and George’s daughter, Barbara Pierce Bush.

While Hicks mingled with the likes of Dallas Cowboys coach Jason Garrett, energy magnate Trevor Rees-Jones, civic leader Tom Dunning and banker Elaine Agather, Laura and George posed good-naturedly for photos. W (pictured) pumped hands with some guests, winked at others, and joked drolly about his mother’s recent comment that he wasn’t easy to rear. “That’s right,” Bush said. “She was trying to say that stay-at-home moms have a job — it’s hard work. And she had to bring me into it. I used to say I’m the reason she had white hair.”

Out on the back patio, meantime, Hicks was asked what he’s been up to these days.

“Doing deals quietly,” he said. Getting “back to basics.” He did 15 years of high-profile transactions with plenty of media attention, he said, but now he’s trying to stay out of the spotlight.

“The media is crazy,” Hicks said. “They do have a filter.”

Clearly her father’s daughter, the Today show correspondent ordered people in the back of the room to pipe down and cracked wise about the items up for bid.

For example, when a mountain bike autographed by W went on the block — the prize also included a bike ride with the former president — Jenna described the joys of biking in the 100-degree Dallas heat, choking on carbon-monoxide fumes from the Secret Service cars. (They wound up selling two of these bike packages, at $17,000 per. Pavestone founder Bob Schlegel bought one of them.)

Also up for bid were a trip to the Capella Pedregal resort in Mexico, a Coldplay concert, a dinner at the National Cowgirl Museum and Hall of Fame, and a Dallas Cowboys package.

Plenty of the guests listened, and presumably most of their checks cleared. At the end of the day the event raised a total of $206,000, enough to fund eight Global Health fellowships.