Harold Simmons Has a Water Problem at His Radioactive Dump

In 2010, Laray Polk wrote a story for us about Harold Simmons titled “Dallas’ Most Evil Genius.” It was about the Dallas billionaire’s efforts to bury radioactive waste in West Texas — with a little help from politicians to whom he contributed money. At the heart of the matter is whether the site Simmons has chosen is an appropriate place to bury that kind of waste. Polk spent a fair amount of time digging around in West Texas, trying to figure out whether the dump site lies atop an aquifer.

Now State Representative Lon Burnam is trying to answer that same question, just as the radioactive waste is being prepared for shipment. Polk doesn’t think Burnam will get his answer. But based on research she did for our story, she sees trouble ahead. Buckle up for some hydrology talk after the jump.

Water and Waste
By Laray Polk

The issue of Harold Simmons and his Waste Control Specialists radioactive dump is both fatiguing and frightening. In the midst of trying to meet a deadline on another project, I’ve been bombarded by Google News alerts and documents hitting my inbox. I’ve tried to ignore them. But then an image popped up on screen: an aerial with indicators of the location of water currently onsite at WCS. Grumbling, I opened the file cabinet.

Almost three years ago, I analyzed drill logs from 1992-93 taken at the WCS site. These logs were conducted by independent geologists prior to the site’s becoming politicized. Maps indicated where the bore samples had been identified as “wet” or “making water.” At the time, the following thought occurred to me: “If these areas continue to register water, there’s going to be big problems.” The most recent map and the map pulled from the file cabinet coordinate with relative precision. So, without further ado, here’s what’s happening:

Yesterday in a press conference, State Representative Lon Burnam petitioned Attorney General Greg Abbott to lift a gag order. The order involves documents Burnam obtained from the Texas Commission on Environmental Quality related to WCS. The documents were secured through a legal battle, though he was required to sign a confidentiality agreement for their release. Burnam, a member of the Environmental Regulations Committee, believes the documents, which include site evaluations, should be in the public domain. And the sooner the better. Within two weeks to a month, the radioactive waste from potentially 36 states is anticipated to start making its way across Texas for burial at the WCS dump. 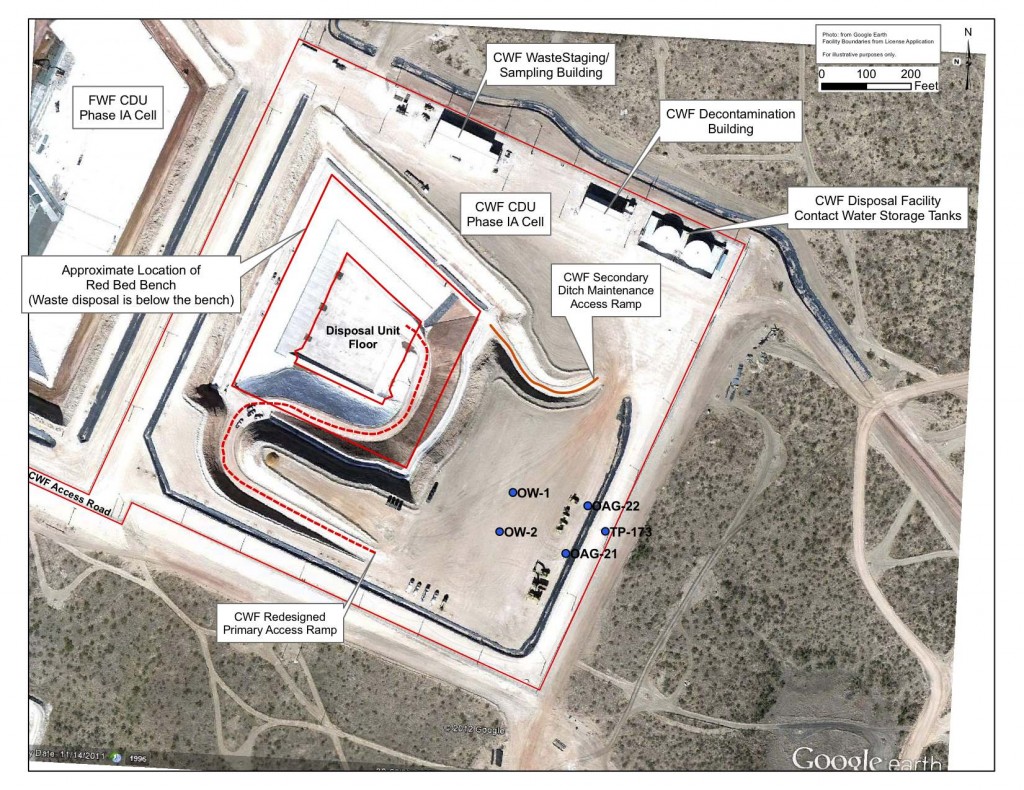 While awaiting the AG’s decision on whether to lift the gag order, there is a sobering fact presently available to the public. There is a continued presence of groundwater at WCS. Specifically, the water is located in the buffer zone where the incoming waste from 36 states is slated to be buried. A letter from WCS to TCEQ, dated March 28, 2012, states: “Between the end of November 2011 the end of March 2012 approximately 23,250 gallons of water have been removed from OAG-21.” (OAG-21 is the monitoring well designation.) WCS then projects “an additional 18 months [at similar pumping rates and rate of groundwater decline] will be required” to take care of the water problem.

The Nuclear Regulatory Commission’s rules are clear: water and radioactive waste do not go together. “Part 61.50(a)(7) is intended to prevent a situation where fluctuations in the water table lead to a wetting of the waste when the water table raises and drying of the waste when the water table falls.” As it has been unsuccessfully asked many times before, are the water fluctuations occurring onsite related to water tables or are these instances of “playas,” as WCS suggests? (A playa is an isolated depression that is capable of holding water.) The state has never allowed any type of public hearing that would answer this very crucial question. In the absence of public disclosure, here are a number of possibilities worth contemplating:

What is being described as a playa could be a functioning recharge zone for a water table. The water table could be the Dockum, Pecos Valley, or Ogallala Aquifer. Even if the water was determined to be linked to a specific water table, further research would be necessary to verify if there is contiguous communication between the three aquifers. Another possibility is that WCS believes what they are calling a playa is really a perched aquifer, that is, an aquifer that is isolated by elevation or other confining layers. WCS’ approach of removing water onsite — given enough time, they think they can pump and dig the water away — would fit this hypothesis.

There are simple methods such as water chemistry and the use of isotopes that could offer definitive determinations. Unfortunately, the Texas Legislature has approved so many favorable situations for WCS, and effectively transferred authority among agencies, as to create a Catch-22. The following are the agencies or entities that cannot be called upon to conduct the simple methods of water analysis or inspection before the arrival of waste from 36 states:

1. The NRC. They only have jurisdiction over nuclear reactors in Texas. (Texas, as an agreement state, has its own regulatory authority over waste from state sources, the TCEQ.)

2. The TCEQ. They’re the ones who grant licenses and have present knowledge of water onsite, even though license condition 65 states: “In the event that saturated conditions are detected in the buffer zone, the Licensee shall cease all waste disposal operations and notify the executive director immediately.”

3. The Texas Water Development Board. They have jurisdiction over aquifers; excluding areas underlying the WCS site.

4. The Department of State Health Services. Their jurisdiction over radioactive materials pertaining to WCS was transferred to TCEQ by the Texas Legislature.

5. The EPA. They investigate and name Potential Responsible Parties (PRP) if and when radioactive contamination occurs.

Chances are slim that Rep. Burnam will be granted a removal of the gag order. The documents in question will most likely remain secret. There is another possibility, however, for formulating an understanding of what is going on with both the geology and hydrology at WCS without those documents. There are enough data available from the 1992-93 drill logs mentioned earlier to create digital 3D visualization/modeling of the site. At this point, it may be one of very few options left.