Who knew Karl Rove was such a comedian? That’s what about 700 people were asking 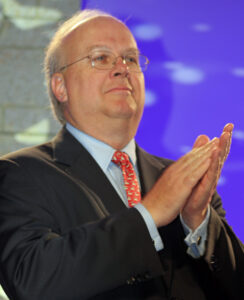 last night when the worlds of Texas oil and gas, Republican politics, and philanthropy came together in one big decked-out room at the Hilton Anatole in Dallas. The occasion: the Methodist Health System Foundation’s presentation of its 2011 Robert S. Folsom Leadership Award to Barnett Shale billionaire Trevor Rees-Jones. Organized by mega-GOP operative Jim Francis, the dinner event wound up raising more than $1 million for Methodist and was emceed by Rove, aka “The Architect,” who was a “surprise” guest.

The “surprise” made sense. Rees-Jones has donated a reported $2 million, at least, to Rove’s American Crossroads, a 527 political group. And Rove’s pal former President George W. and his wife Laura Bush served as the shindig’s honorary chairs. The Bushes were no-shows, though, which Rove acknowledged right off the bat: “I have heard the ugly rumor, and I want to deny it. 43 is not here tonight out of personal pique over not getting this award,” Rove (pictured in photo by Jeanne Prejean) told the crowd. “… The true reason is because of mountain biking. [Bush and Rees-Jones are both biking enthusiasts and have ridden together]. The president is a little irritated that Trevor didn’t lay back. Instead, he rides the president’s sorry ass into the ground every time.”

Mountain-biking as well as hunting (Rove’s a big quail hunter) were major themes during the dinner, in keeping with the two-fisted personas of these outsized, red-blooded Texans. At each table setting there was a camo-colored duck call, for example, and the diners were encouraged to use them. Rove also recalled helping host FOX news personality Chris Wallace once on a Texas bird hunt.

After Wallace had fussily outfitted himself in the latest, de rigueur hunting togs, Rove recalled, the broadcaster asked if Rove had any last-minute advice for him. ” ‘Yes, and I want you to think about this every moment you’re out in the field,” Rove told him. “Rule No. 1 is, there are two trucks. When in doubt, always get on the truck with the good-looking women. There’s nothing as sexy as a good-looking woman with a shotgun who knows how to use it.’ ”

Rees-Jones, for his part, later said he wanted to correct Rove’s story about mountain-biking with the former president. “I can’t beat the president on a single track, because the Secret Service is in my way,” he told the big crowd, which was already chuckling. “But on the straightaway, in a sprint, I get him. Don’t remind him of that, though, because it’s a sore subject.”