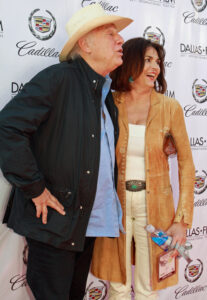 all wrong. “There’s too much high-falutin’ stuff going on, and not enough nuts-and-bolts stuff” like education being stressed, Walker said during an appearance in Dallas’ West Village last night. Arts education is important but especially vulnerable these days, he added, pointing out how it had benefited his son, musician Django Walker.

Jerry Jeff, who’s 69, and his wife Susan (pictured in photo by Jeanne Prejean) were doing the red-carpet thing in support of OK Buckaroos, a new documentary about Walker’s life that’s being featured this week at the Dallas International Film Festival. Susan and Jerry Jeff–he’s one of the Austin-based musicians who helped start country’s so-called Outlaw Movement in the early ’70s–have worked as a team for years pioneering ways to book his shows and market his music independently via the Internet, direct-mail, and TV infomercials.

The big takeaway from Buckaroos, Jerry Jeff said, is “that you can be a free spirit” and make it in your chosen field.

Walker has certainly done that. Still based in Austin–“I live in the bluest part of a red state,” he joked on 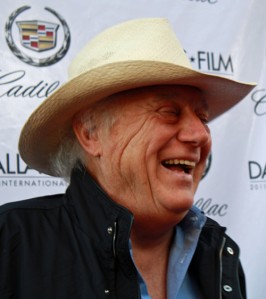 the carpet–he keeps up a busy touring schedule and has a “retreat” on Ambergris Caye in Belize. During a formal Q&A following Tuesday’s screening of OK Buckaroos at the Magnolia, Walker mentioned that his IRA account now is around $1 million: “Elvis always said, ‘All I want is $1 million in the bank and an airplane.’ I’ve got both.”

Best known for his hard-core fan base and for songs like “Mr. Bojangles” (which he wrote), “Up Against the Wall, Redneck Mother” (penned by Dallas’ Ray Wylie Hubbard, who’s featured prominently in the new film), and “L.A. Freeway” (a Guy Clark tune), Walker also keeps busy these days playing corporate gigs. Asked why earlier in the evening, he replied, “Because all these baby boomers who grew up with my music own s*** now!”

The most interesting moment during the formal Q&A came when a fan asked the location in Texas of the “Green Frog Cafe” that Jerry Jeff sings about in Guy Clark’s song, “Desperadoes Waiting for a Train.” Walker whipped out his cell and put Guy on speaker-phone, so that everyone in the audience could hear the answer. While there are a number of Green Frog Cafes in the state, Clark explained, the one he had in mind was in Monahans (which happens to be Clark’s hometown).

Later, during an after-party at Gilley’s for the film, which shows again this afternoon at the Magnolia at 4:30, Walker turned up and sang three songs: “Redneck Mother,” “Trashy Women,” and “Sangria Wine.” Susan, meantime, was down among the fans in the crowd, clapping her hands and grinning infectiously and, during “Trashy Women,” taking a spin around the dance floor with a tall guy in a cowboy hat.