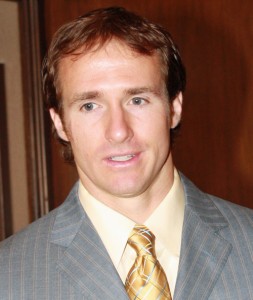 NFL quarterback Drew Brees says he’s hopeful about an end to the lockout that’s threatening the league’s 2011 schedule. “I’m always hopeful,” Brees said in Dallas today. “We just want to get back on the field and play. That’s why we went to court in Minnesota.”

The New Orleans Saints QB (shown in photo by Jeanne Prejean) is one of several leading players who are plaintiffs in a class-action lawsuit filed in St. Paul against the NFL. The antitrust suit against the owners is asking for an injunction that would let the players go to work.

Dallas-born Brees, a member of the executive committee of the NFL Players Association, made the comments before speaking at an annual fundraising luncheon for the Dallas Children’s Advocacy Center.