Rob Allyn, whose Dallas-based Allyn & Co. helped mastermind many a winning campaign for 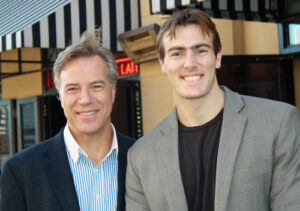 well-connected local pols and causes, has moved on to new endeavors these days, like making movies. But Allyn continues his moving and shaking among some of the heaviest hitters around. Consider, for example, the development of his film company Margate House Films Ltd., whose Indonesian revolutionary-war flick Blood of Eagles–co-directed by Allyn’s son Conor (pictured here with Rob in photo by Jeanne Prejean)–will show again Thursday at 4 at the Dallas Angelika, part of the Dallas International Film Festival.

The elder Allyn says he got into making these Indonesian war movies when Dallasites Ray Washburne (of Highland Park Village) and Al G. Hill Jr. introduced him to Hashim Djojohadikusumo, one of Indonesia’s wealthiest businessmen. Two of Hashim’s uncles had been killed in 1946 in Indonesia’s budding revolution against the Dutch, and the businesman told Allyn that more people should know about the war. Rob and Hashim talked about making flicks together to do that and, to help finance his part, Allyn proceeded to call upon a tony network of Texas A-listers. Among them: former W adviser Mark McKinnon; former Federal Judge Joe Kendall; Hill Jr.; Dallas mayoral candidate Mike Rawlings; oil magnate Albert Huddleston; Lee Roy Mitchell of Cinemark; Blockbuster CEO Jim Keyes; and state Sen. John Carona. So far the partners have coughed up $6 million in equity, Allyn says, which he’s leveraged up to a total of $20 million for Margate’s moviemaking.