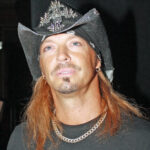 Entertainment and others over injuries Michaels suffered at the 2009 Tony Awards,Â the Poison lead singer said in Dallas Saturday.

Talks to resolve theÂ matter earlier broke down because, “let’s just say, they were pretty cold,” Michaels said, referring to the defendants in the lawsuit, which was filed in L.A. by his lawyers Friday.Â While Trump offered to intercede and advised him to sue aggressively, Michaels said, he decidedÂ mainlyÂ to askÂ to be compensated for work-time lost due to his injuries, which included stitches with a cut lip and a broken nose.

The singer, whoÂ starred on VH1’s stop-rated Rock of Love show and won Trump’s Celebrity Apprentice TV competition on NBC, had just finishedÂ performing Poison’s hit, “Nothin’ But a Good Time,” on the TonysÂ broadcastÂ when a giant scenery piece was lowered and whacked him in the face. There were no safety warnings or precautions in place,Â Michaels said, and the broadcast could have beenÂ “delayed” to avoid embarrassing him. “They never needed to show me getting hurt,” he added. “They didn’t offer to pay my medical costs or anything.Â … I’m sorry it came to this.”

Michaels, 48,Â discussed theÂ legal dispute afterÂ being honoredÂ Saturday at a juvenile-diabetes fundraiser–he’s suffered fromÂ type 1 diabetes Â for 42 years–sponsored by the Juvenile Diabetes Research Foundation. The singer (pictured in photo by Jeanne Prejean) was also scheduled to perform at the Rock ‘n’ Roll Half Marathon in Dallas today.