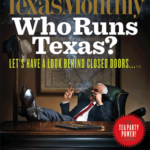 Former TM president Evan Grant Smith puts up the list from the February issue on the Texas Tribune site, mostly consisting of lobbyists, operatives, and donors. The only Dallas name is R. Brint Ryan of Ryan & Co, which I take to mean G. Brint Ryan, the company’s founder. How did aÂ defeated Dallas city council candidate — who ran the most expensive council campaign in Dallas history — emerge as one of the 25 people who run Texas? Can’t say, except that he serves on the executive committee of the Texas Association of Business and was appointed by Rick Perry to the UNT Board of Directors. That mustÂ be a friendship recently formed, as he gave $400,340 to Carole Strayhorn in her 2006 race against Perry.