James on Leach Flap: Most in Lubbock Support Me 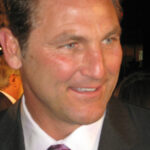 “I feel very confident about our position,” said James (pictured). “Most people in Lubbock support my position. We did what any responsible parent would do. We did the right thing.” A complaint filed by James and his wife over Leach’s alleged mistreatment ofÂ their football-player son led toÂ Leach’s firing late last year.

Asked when he’d make a decision aboutÂ jumping intoÂ the Republican senate primary, James said, “I’ve got to analyze it. I’m thinking about it. I’ll announce [my decision] sooner rather than later.”Â  The former football star was amongÂ several luminariesÂ in Plano Friday for the premiere ofÂ  SLANT 45 The Movie, a project of the North Texas Super Bowl XLV Host Committee and Big Thought.

Dallas’ most important news stories of the week, delivered to your inbox each Sunday.
Craig James Mike Leach
Advertisement