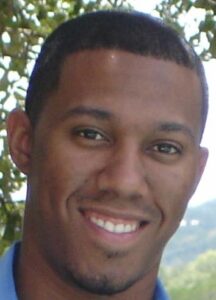 (This is the second of four mini-profiles of the semifinalists of theÂ D Magazine Words With Friends Tournament.Â Trennis Jones will face Rhett Miller in one of our two semifinals on June 9. Read to the jump to see this member of our Finally Four answer the same questions as ourÂ 10 Most Beautiful Women in Dallas nominees.)

Trennis Jones has worked for sports agency Octagon, in the basketball division, for 5 Â½ years. The agency represents clients like Chris Paul, Rudy Gay, Stephen Curry, and Kirk Hinrich. His largest personal signing this year was Tweety Carter from Baylor University. He’s working hard to make sure Tweety’s name is called June 24 during the NBA Draft.

Jones has played WWF consistently for the past six months, appreciating the fact that he is exercising his brain while taking a break from the daily grind of work. His toughest match of the tournament came in the first round, against Krys Boyd, the host of Think on KERA. He was playing from behind the entire match, until the last few plays. He hit a groove in rounds 2-4 of the tournament and says that he was fortunate in that the letters he drew allowed him to score well and play good defense.

While Rhett Miller played the grandmother card in the hopes that your sympathies would support him in the semifinals of the tournament, Jones points to his mother as his inspiration. Grova Jones is a big fan of playing Scrabble and taught her son how to love the game. One of these players is going to severely disappoint his relatives after only one comes out on top in their match on Wednesday.

People would say your best feature is your:

I would most definitely be the flirty one.

Either playing golf, sleeping, or reading.

At Nick and Sam’s Grill … Crown on the rocks.