Gluten-free student Christiana Finch took Mike Orren of Pegasus News out to the woodshed in their first-round matchup, beating him 494 to 290 in about five hours.Â Meanwhile Rod Durham, a construction project manager, took out pastor John Austin by a score of 367 to 296.

And Rhonda Reinhart, the managing editor of D Home, says she had her hands full during a seven-hour battle with Wendi Burleson. Here’s her account of her 414 to 333 win:

It was a pretty close game for most of the round. Wendi is a formidable opponent. But getting to play “yeti” for a triple-word score late in the game was satisfying for a couple of reasons. It sealed my win and reminded me of this gem from Tim Rogers.

More game boards after the jump. 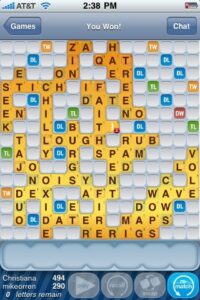 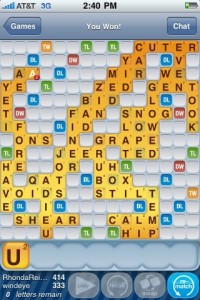 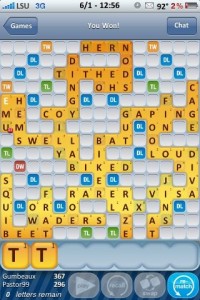