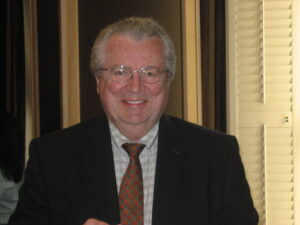 If John Hofmeister’s predictions are half as good as his timing, the U.S. could face an “energy abyss” by 2016. And, Hofmeister’s timing is pretty good. The former president of Shell Oil Co. originally planned to release his new book, Why We Hate the Oil Companies, in May, to capitalize on public ire over typically higher summer gas prices. Then the Gulf oil spill happened, and Hofmeister (pictured) has been a hot commodity on the lecture and media circuit ever since. This morning he brought his take on all things energy to the World Affairs Council of Dallas/Fort Worth.

In a nutshell, Hofmeister said, the U.S. will face a new age–the Age of Energy Abyss–as early as 2016-2020, unless we do “whatever can be done to get energy out of politics,” adding, “politics is destroying the nation’s energy future.” What does abyss mean in this context? “The U.S.A. will look like a third-world country has taken over and is running it, when it comes to our energy system,” he said.

In Hofmeister’s view, the country built an unparalleled energy infrastructure beginning in the early 20th century, but then began relying too heavily on foreign oil–first for cost reasons, later because environmentalists didn’t want to drill domestically. Eight presidents (starting with Nixon) and 18 Congresses have vowed the U.S. should become “energy independent,” all to no avail, Hofmeister said.

President Obama was only the latest to do so, calling specifically for the development of wind and solar power, he said. The problem: 98 percent of the energy for our advanced industrial economy comes from oil, gas, nuclear and hydropower sources, while just a fraction (2 percent) derives from alternatives.

All this while nuclear power remains in disfavor–Hofmeister cited the administration’s decision to cancel the long-planned Yucca Mountain waste depository in Nevada, “effectively gutting a law” passed by Congress–coal has been demonized, and a six-month moratorium on deep-water oil drilling has just been imposed (a moratorium that Hofmeister won’t be surprised to see extended).

A cadre of presidentially favored environmentalists, academics and politicians is bent on halting domestic resource exploitation, Hofmeister said, at a time when the population continues to grow–and the demand for electronic devices (which require electricity to run) continues to boom. The upshot: brownouts, blackouts and long gas (station) lines can be reasonably expected in our future.

The problem with politicians developing energy policy, Hofmeister said, is that they’re consumed with partisanship, and operate on a two-year election time clock (while thoughtful energy planning needs to be longterm). Meantime no fewer than 12 federal agencies, plus 26 congressional committees or subcommittees, have their hands in energy policy, Hofmeister said, rendering the federal government “dysfunctional, broken and unfixable” when it comes to energy and the environment.

“Is there efficiency? Is there accountability? Not in our federal government,” Hofmeister said. “That’s why we hate the oil companies–it’s a metaphor for the fact that we really hate ourselves, because we let it happen.”

Hofmeister, who’s the founder and CEO of a Houston-based group called Citizens for Affordable Energy, said two things need to happen to fix all this. Just as establishing the Federal Reserve in 1913 has led to 97 years of stability and progress economically, he said, the nation needs to establish an “independent regulatory agency” for energy.

Such an agency would manage future energy supplies, make important technology decisions (like furthering the use of hydrogen fuel cells), manage the carbon and environmental footprint, and set parameters for state and regional energy-infrastructure requirements.

But it will never happen, Hofmeister concluded, unless and until the second thing happens: Tens of millions of people–members of an authentic grass-roots movement–rise up and “begin the long march to Washington, D.C.”