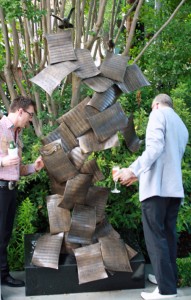 You can’t help admiring the business savvy of sculptor/product designer Brad Oldham. Besides creating avante-garde stuff like the “Traveling Man” in Deep Ellum and tricking out fancy restaurants like New York’s Nobu, the Dallas-based co-owner of Brad Oldham International Inc. has developed a thriving trade in “site-specific” sculptures for private collectors.

That side of his business was on full display Saturday, when Preston Hollow philanthropist Faye Briggs threw open her Desco Drive manse to unveil two bronze sculptures Oldham created for her. The one shown here (all photos by Jeanne Prejean) is called “Faye’s Song.” To the layman’s eye, it’s basically a bunch of sheet-music ditties (“A Midsummer Night’s Dream,” for example) that Faye likes, all stitched together, with a few “birds” sitting on top of some of the sheets.

Brad’s other sculpture for Briggs, called “Imperfect Princess”–shown at left being eyed by Bob Alexander–is meant to depict a regal figure apparently not unlike Faye, her crown askew, one arm reaching out. “It’s about giving and receiving,” Brad explained. (Faye is a major donor to groups including the Dallas Symphony Orchestra.)

Oldham said he’d collaborated with Briggs and his wife/business partner, Christy Coltrin, to conceive and design these sculptures, which now sit in Briggs’ spacious backyard. Faye, speaking with Brad (pictured below with Briggs) to a big garden-party crowd gathered for the unveiling Saturday, said that when she first heard about his ideas for the two sculptures, she “got goosebumps.” 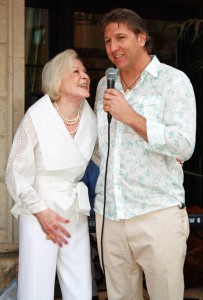 There seemed to be a lot of potential clients for Oldham at Saturday’s shindig. Among the heavy-hitting society/philanthropy/business types present were design-firm chairman Frederick Merrill, banker Elaine Agather and Realtor Robbie Briggs (he’s Faye’s nephew).

Social-circuit staple Barbara Daseke said Brad had already completed a sculpture for her and her husband Don, and was even storing it for them until their new house was built.