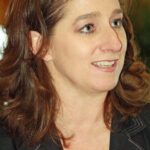 On the one hand theÂ implosionÂ meansÂ great PRÂ for the city, Gast said, with 300 media types expected and exposure on CNN, Inside Edition, Good Morning America. On the other, Sunday will mark the end of a place–and anÂ era–that touchedÂ many: “We’ve been surprisedÂ at the depth of emotion and passion for the history that happened at that stadium–by the fans, the players, really all of us,” said Gast (pictured; photos by Jeanne Prejean). 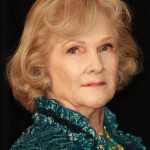 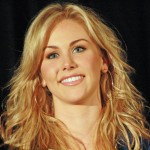 It was the ex-Cowboys, though,Â who attracted the most attention during a series of “live interviews” by co-emcees Scott Murray and Candice Crawford (pictured), a KDAF-TV reporter who’s said toÂ double as Tony Romo’s main squeeze.

Murray kicked things off by noting that much has changed since Texas Stadium opened in 1971–and Garrison agreed. Clad in his trademark cowboy hat, the former ‘Boy and rodeo competitorÂ recalled that backÂ in those days, aÂ can of Copenhagen orÂ Skoal cost a whopping 27 cents.Â Garrison alsoÂ recalledÂ telling someone thatÂ he’d seenÂ Coach Landry smile exactly one time, but added: “I only played for him nine years, though.”

Dupree, for his part,Â said the Cowboys of his era were “a professional team with a college attitude,” and that Texas Stadium “seemed to bring out the Hollywood in people.” Certainly, it brought out the big-time names. Hennings, for example, said that one of his fondest memories came one yearÂ after Dallas hadÂ finished whippingÂ its arch-rival, the Washington Redskins.

HenningsÂ was standingÂ in the locker room, having just pulled on his shorts, when he felt a tap on his shoulder and turned around to find Saudi Prince Bandar bin Sultan, a huge Cowboys fan. “Chad, how are you?” the prince said. “I want you to meet a friend of mine … Nelson Mandela. Now let’s have a picture!” After the photo wasÂ snapped with a barely dressed Hennings posed between the two world figures, Chad recalled, he toldÂ theÂ photogapher: “Burn the negatives on that one.”

Harris said he was personally awed by Texas Stadium, and that it was a threatening place for visiting teams. Two big reasons: the Cowboys had aÂ good record there, and the famed “hole in the roof” could make it tough to see the football between the sunlight and the shade.

Preston Pearson, meanwhile, recalled the integrity–and the consistency–of Coach Landry. He also remembered how, during his first game at the IrvingÂ stadium,Â he was metÂ with a sign that said: “Welcome to Dallas Preston Pearson.” That welcoming sign, he added, may be one reason “I’m still in Dallas 35 or 40 years later.” 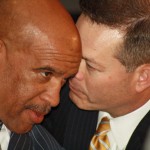 So, how do the players who gathered in Irving todayÂ feel about the stadium’s imminent demise?

Harris was philosophical: “It’s kind of like tearing down the place you grew up in. But, it’s progress. We wouldn’t have had the [2011] Super Bowl if not for [Jerry Jones’ new Cowboys Stadium in Arlington]. Texas is not for standing still; it’s for the new.”

Drew Pearson took a more graphic approach: “They can take dynamite and blow up the stadium. But the one thing they can’t do is take a stick of dynamite to my head and implode my memories.” 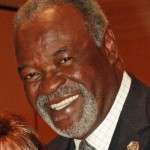 It was Wright, though,Â who had one of the last words–and the most poignant thought of the day. “I had a 17-year-old German Shepherd,” remembered Wright (pictured). “We used to drink a can of beer together after every game. That’sÂ probably why he lived to be 17! But, I wound up having to carry him to the vet to be put down, to be put to sleep. After all these years, it’s time for Texas Stadium to go to sleep, too.”