Like Tim hinted, the ridiculously talented author/journalist Michael Lewis doesn’t blame the financial meltdown on Washington’s rules pushing homeownership, as many conservatives (ahem) have been inclined to do. At a luncheon in Dallas today Lewis (pictured) called that explanation a red herring, saying what D.C. didn’t do about subprime mortgage loans was more to blame.

“The brief for [Fannie Mae and Freddie Mac] was expanded, but there’s a lot of telling numbers that suggest it wasn’t the explanation for the crisis. In fact, [Fannie and Freddie’s] percentage of the market went down between 2003 and ’06,” said Lewis, author of a new book about the meltdown called The Big Short: Inside the Doomsday Machine. “Private capital markets were so hungry for raw material, they replicated synthetically the worst” of the subprime loans to make more loans–and more money.

If you’re going to fault Washington, he added, fault it for not looking closely enough at credit default swaps–and for allowing the credit-rating agencies to run amok. “The [financial] machine had a life of its own,” Lewis said, “apart from Washington.”

The title of Lewis’ new book refers to the “short” bets Wall Street traders placed on the subprime mortgage market, effectively wagering that homeowners would lose their homes after defaulting on their house payments. When that happened these gamblers made hundreds of millions of dollars–as did the big financial firms that were later “bailed out” by the federal government.

So, Lewis was asked at the luncheon, does that mean that capitalism as we’ve known it doesn’t work anymore?

“When the rules in the financial system get so perverted, you still prosper; people on the right and the wrong side of the bet get rich,” Lewis replied, explaining the meltdown scenario. “The markets need the right rules to function properly. They had the wrong rules. The rules on Wall Street need to be changed, but that’s hard to do.”

Take “securitization,” for example, the process of bundling together certain types of loans for resale into a secondary market. The crisis was “an indictment of a specific kind of securitization in the subprime market [subprime-backed “collateralized debt obligations”] where the person making the loans doesn’t put any skin in the game,” Lewis said. “The originator doesn’t care whether the loan is paid back or not.”

The unsaid implication: that sort of securitization needs to be deep-sixed.

Asked whether he thinks we were truly on the brink of another Great Depression–the rationale W.’s treasury secretary, Henry Paulson Jr., used in asking Congress for the ’08 Wall Street bailout–Lewis said, “I assume so. But, what was the alternative?”

He added that Paulson, a former CEO at Goldman Sachs, should have recused himself from the Wall Street-rescue argument, since “the appearance of corruption was so [strong,] it might as well have been corrupt.”

However, Lewis said, the bailout that resulted had at least one silver lining: “It so enraged the population that we might get real reform.”

At one point Lewis tried to steer his interviewer, Dallas lawyer Talmage Boston, away from The Big Short, and he finally succeeded. Besides authoring the groundbreaking 1980s Wall Street tome Liar’s Poker and Moneyball, about the Oakland A’s, Lewis also wrote the book that inspired The Blind Side, the hugely successful recent Sandra Bullock flick.

The Blind Side rights were sold to Fox and sat on the shelf for two years, Lewis recalled, while Fox waited for Julia Roberts to agree to star. When that didn’t happen the project was snapped up by FedEx founder Fred Smith, a Memphis resident who knew the family Lewis wrote the book about. Smith spent $29 million to make the film, and expects to gross $400 million.

Proving one big thing: Anything this guy Lewis touches turns to gold. 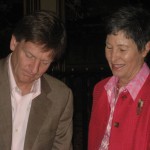 Today’s luncheon at the Fairmont Hotel was presented by the World Affairs Council of Dallas/Fort Worth. The crowd of 750 included local philanthropist Lyda Hill (pictured, having a book inscribed by Lewis), who said she first knew the author when he was growing up in New Orleans.