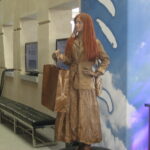 This Gilded Shopper “statue” was one of several Dallas icons on display outside the city’s booth this week at the Professional Convention Management Association annual meeting, which ends today at the Dallas Convention Center. (Other statues, which were actually live people who looked to have been spray-painted gold, included an artist in a beret and a couple of cowboys.) Relaxing on a couch near the Gilded Shopper this morning, the Dallas Convention & Visitors Bureau’s Phillip Jones called the PCMA meeting “our Super Bowl” and said “I never expected it to be as successful as it was.”

Total attendance could top the previous record set by Seattle, Jones said, and, as of this morning, local tourism types had already hosted 180 “site visits” by meeting planners during the confab. Seattle, by contrast, hosted just 80 site visits during its meeting in 2008, Jones said. Joseph Perkins, a manager with the Sheraton Dallas, said the Sheraton alone hosted 52 of this week’s visits. And, something else came out of the PCMA convention, Perkins said: a signed contract calling for Dallas to host a gathering of the International Trademark Association, bringing some 7,000 people to North Texas in 2013.

Must have been the Gilded Shopper that cinched it.