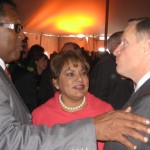 Does Ross Perot Jr. know something we don’t? Speaking at today’s groundbreaking for the new Museum of Nature & Science at Dallas’ struggling Victory Park, which he helped develop, Perot said, “Mr. Mayor! Where is the mayor?!” before pointing to City Councilmember Dwaine Caraway, sitting in the audience down front. Mayor Pro Tem Caraway (pictured at far left with Deputy Mayor Pro Tem Pauline Medrano and Perot) is not quite the mayor yet, but he’ll be well-positioned if Tom Leppert ever steps down to run for the Senate. Leppert, who’s in China, nonetheless made a video appearance at today’s bash for the museum, a $185 million project that got a jump-start when Ross Jr. and his siblings donated $50 million in honor of their parents, Margot and Ross Perot Sr. The 14-story edifice on 4.7 acres can’t hurt the Victory project, which has been attempting lately to attract a better tenant/demographic mix. And, Ross Jr. said, “What people don’t understand is there’s enough room here for the museum to double in size.”