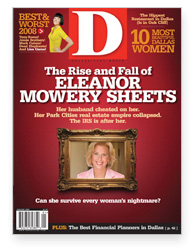 The cover story of the January issue of the “print product” (not yet online but already in most subscribers’ hands) is about Eleanor Mowery Sheets and her husband Nicky. The short version: Eleanor sits (or sat) atop the food chain of high-dollar, high-profile residential real estate agents. As in, when the WSJ published a list in November of the top producers in the country, Eleanor took the No. 17 spot. Now the feds are after Eleanor and Nicky for unpaid taxes. The issue hits newsstands this weekend. I encourage you to buy one.

You know who doesn’t encourage you to buy one? Nicky Sheets, that’s who. He’s been sending around an e-mail with our story as an attachment, asking people not to buy the magazine. Jump to read his e-mail and the impassioned letter he also sent out.

Pleae [sic] take a moment to read this and the three attachements [sic]. We truly appreciate your support and friendhsip [sic]. This does not right a wrong, but we hope it offers some perspective on our thoughts and emotions at this time.

PS. I prefer you give away the article if someone ask instead of purchasing the magazine.

As I say, one of the attachments was our story, which he’d copied and pasted from our website. Right, yes. I said the story wasn’t online yet — not officially anyway. But the story did exist on our server, waiting for our web folks to press the “publish” button. If you knew how to find it, you could find it. Somehow Nicky found it. Shame on us for having an online system cobbled together with duct tape. Because of our own ineptitude, the Sheetses read the story before we technically published it. Ah, well. Live and learn.

But reading the story is one thing. Pasting it into a Word document and e-mailing it around town, along with a note asking people not to buy the magazine — that’s something else entirely. It raises interesting questions about copyright laws that I will, all things considered, leave unanswered for now. The IRS is asking Nicky Sheets all the questions he can field right now.

Now then. On to the other two attachments to his e-mail. One was a letter from Nicky expressing remorse for mistakes he’s made (including one that got him arrested for solicitation of prostitution) and his hope that “God will give us all the strength to get through this.” The other attachment was a letter from Eleanor. Read the entire thing, if you like. But here’s the part I’d like to address:

As you know, this magazine’s tradition and claim for prominence preys on its ability to criticize and humiliate high-profile people in Dallas. You have seen that in numerous articles — so-called profiles — that D has targeted over the years.

This article is exactly the same.

Earlier this year, I canceled my company’s D Magazine advertising after its affiliated blog, DallasDirt (edited by Candace Evans), challenged the quality and integrity of my client, a builder in the Park Cities. … I canceled what has amounted to some $380,000 in advertising dollars over the last three years.

In retrospect, that may have been a mistake, because Candace Evans and her cadre of posters, through the DallasDirt blog, unleashed on my family, clients, employees, and friends a repository of ill will. Bloggers on this site, who are allowed to remain anonymous, created excessive posts on the blog threads that accused me, Nicky, and my company of irresponsible and untrue activities. Those threads, accompanied by our longstanding issues with the IRS, hit the public domain in late July and early August. The effects have been devastating, and I believe they have been exacerbated by the accusations and behind-the-scenes maneuvers by a cast of characters with an insatiable appetite for destruction. All of that produced a devastating and dramatic implosion of our business.

And finally, it has now resulted in D Magazine‘s article that you will see this week. …

The uncharted waters ahead are impossible for us to navigate alone. However, we know that God promises: THROUGH HIM all things are possible. With very humble and heavy hearts, we pray for his promise as we also ask for your prayers of support and strength.

Our family has locked hands and hearts to start our new journey with the song in our hearts for us all: “He will lift us up on eagles wings, bare us like the breathe of dawn, make us to shine like the sun, and hold us in the palm of His Hands.”

Eleanor claims that she pulled her advertising because we criticized her client. She claims that we retaliated by trashing her with “excessive posts on the blog threads” and, now, by publishing her story in D Magazine.

The truth of the matter is that Eleanor Mowery Sheets did not pull her advertising from us. After our business department experienced payment issues with her, they dug a little deeper into her creditworthiness and discovered multiple federal liens. It was then that D Magazine made the decision to not accept her advertising. Furthermore, these business issues had nothing to do with the editorial decision to write a story about Eleanor and Nicky. I was unaware of them when I asked Gretel Kovach to write the story — a request made based on the federal lawsuit filed against the Sheetses.

Bottom line: the Sheetses will have their day in court. They are innocent until proven otherwise. But neither God nor advertising has anything to do with whether D Magazine decides to do a story about you. In that regard, federal lawsuits are far more relevant.

71 responses to “The Sheetses Hit the Fan”