Near the edge of Good Latimer, on Elm Street, lies an old warehouse with the word “Electric” illuminated by the golden hue of incandescent light bulbs on its façade. On the East-facing exterior, you’re greeted by a vibrant, diamond-patterned mural by artist Maya Hayuk.

Inside that brick building, Electric Shuffle opened its first U.S. location outside of the United Kingdom on November 19. With two floors and some 15,000 square feet, now you can play rounds of shuffleboard alongside rounds of beer and craft cocktails in the once-dilapidated warehouse at 2615 Elm Street.

If you’re a new player, don’t worry. The shuffle tables make the game easy-breezy with a state-of-the-art system that keeps score, allows players to form teams, and has up to four different game modes. (You can even request food and drink through the system.) Players are randomly assigned a table location. In all, there are 17 shuffleboards, two bars, and other loungey, semi-private playing areas, too. 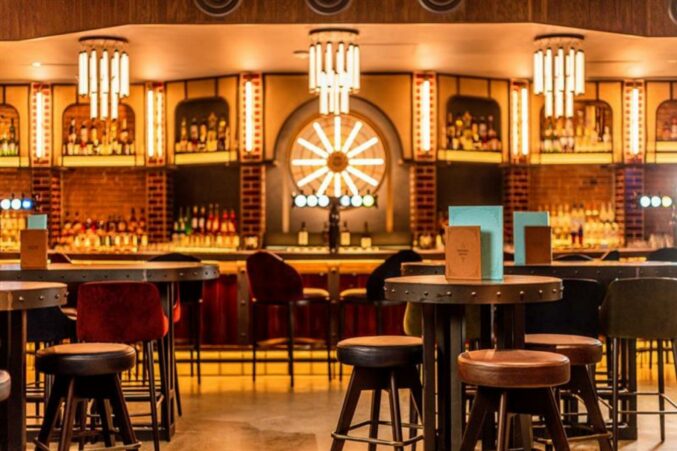 Underneath the glowy lights at Electric Shuffle, play a round of shuffleboard alongside a round of beers.
Courtesy Electric shuffle

Even if you’re not a fan of shuffleboard, the place has something for everyone. You can also simply chill, it is a bar after all. “The whole point is to make it feel cozy and intimate like an amazing bar,” says Gene Ball, the CEO of Electric Shuffle USA. “Shuffle tables are great, but we want to build an amazing bar people can hang out in.”

On the drinks menu, find cocktails such as an espresso martini, which delivers a jolt of electricity (see what I did there?). There’s also the Notorious FIG, a tipple of fig-infused vodka, lime, and ginger beer. Of course there’s plenty of craft beers as well.

To eat, there’s bar-typical fare (think small bites bar food), like “The CBR,” a flatbread with juicy pulled chicken, smoky-crisp bacon, and creamy ranch dressing on the side. Hence the name, CBR, for chicken, bacon, and ranch. Ranch enthusiasts will appreciate the condiment—long live ranch! 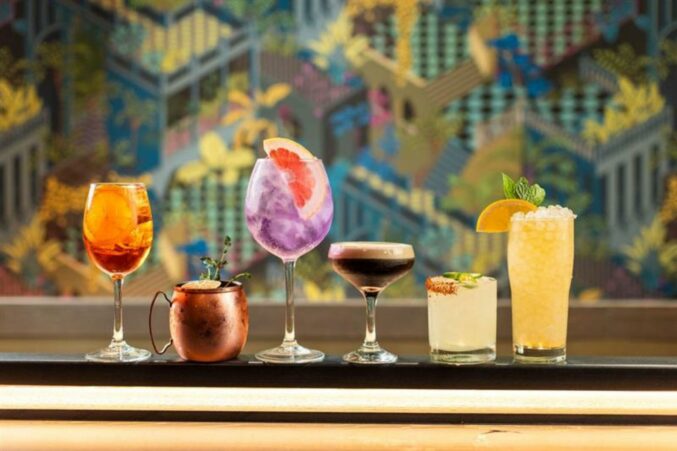 The venue’s variety of private rooms, each with their own aesthetic, are good for parties, corporate events, and other social gatherings. Formerly an industrial elevator shaft, a room dubbed “The Library” features a wall adorned with old books and lo-fi electronics allowing for the perfect quiet space. With shelves of books, resist the urge to climb a ladder and swing around them like Belle in her iconic library scene from Beauty and the Beast. Want something less Disney princess and more Star Trek Enterprise? Hang out on the second floor, where “The Spaceship” occupies a corner blinking with retro controls that will make you feel like someone just said, You have the con!

“Shuffle tables are great, but we want to build an amazing bar people can hang out in.”

Despite this, Ball assures that each location isn’t cookie cutter: “You’ll never walk into a similar Electric Shuffle.”

What Else Is There?

Brunch
Saturday and Sunday from 10 a.m. to 3 p.m.
Reservations for groups of 4 to 16 people.
Includes an entire bottle of bubbly per guest and an hour of shuffleboard. Also: live DJs, bacon jam pizza and brunch boards (mini chicken and waffles, avocado toast, assorted pastries). $50 per person

Power Hour
Happy hour, weekdays from 3 to 6 p.m.
Reservations for groups of 3 to 16 people.
Includes an hour of bottomless pizza, shuffleboard, and choice of two beers, seltzers, or wine. $25 Per Person

Editor’s Note: This article was updated on Nov. 29 to include the correct spelling of Gene Ball.

Everything You Need to Know About Ichigoh’s Ramen Takeover