I know we wrote about the Piehole Project Pie Auction returning this year for its annual run. In the virtual event, chefs bake their whimsy into pies which are then auctioned off to raise funds for much-needed local culinary scholarships under the aegis of the nonprofit FestEvents Foundation. The auction went live on Tuesday (Oct. 18-28). To me, it’s worth noting, however, the creativity behind this year’s line-up of pastries. The diversity of the stars impresses and says something about who we are as a culinary city.

Certainly, we have winter nap-inducing deep-dish apple pies and bourbon, pecan, and pumpkin meeting in brilliant, classic arrangements. But I don’t imagine, and I can’t remember, another year in which the chefs took to heart so thoroughly the notion that a pie is a dish consisting of contents nestled within a pastry shell. And that the rest is invention. A chance to push boundaries. It’s a chance to see our city’s chefs being creative. As though this year, they all colluded and decided we needed that. 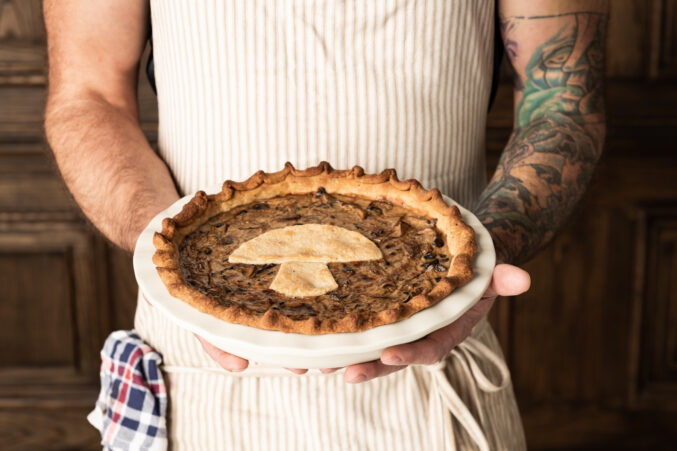 Matt McCallister of Homewood presents his Black Truffle & Mushroom Pie, which screams Welcome to Fall but in a very cool, chill way. The mushroom cutout on top is, literally, chef’s kiss.
Manny Rodriguez

They master the finish. Joe the Baker makes a grapefruit cream pie laced with tequila grapefruit marmalade set in a lime sablee crust, but the toasted mezcal meringue, like a fabulous bouffante, mirrors the eye-catching drama of a baked Alaska. And savory chef Joel Orsini is making a sour-sweet lemon pie topped with drifts of meringue so petaled with edible flowers it’s reminiscent of the famous Dior flower-bedazzled fashion shows.

But then there’s the lobster chaudfroid that tops a dainty, smoky mound of Gulf crab dip that’s been layered into a pie crust hinting at Old Bay. 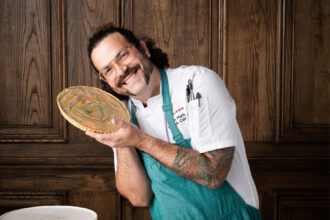 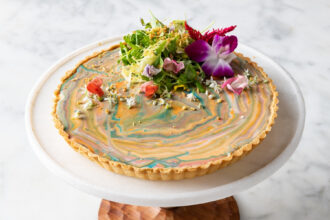 And the consensus seems to be: Sure, do a brown-butter crust and milk chocolate mousse, but let it be Nick Walker’s confection that marries them with parsnip cream and black truffle gelee.

Nine of the 30 pies are savory.

Misti Norris’ pie, in fact, is essentially a dumpling-filled dumpling. This, to me, seems like a brilliant, madcap begging of the question: If both are pastry-encased, is there really a bright line between a pie and a dumpling? Or, for that matter, a dumpling and a calzone? Discuss. 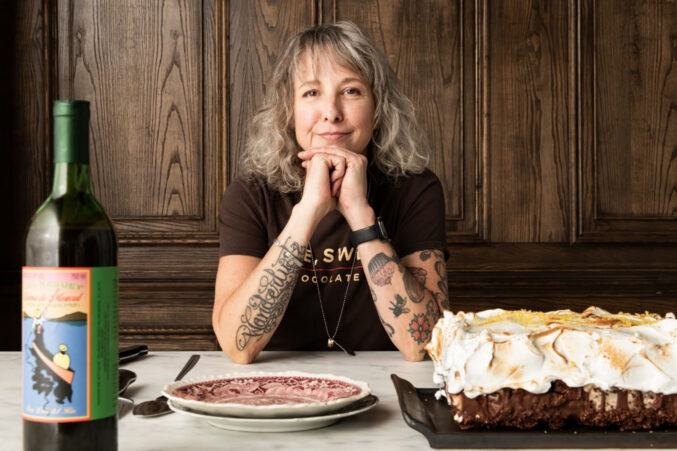 Not us just appreciating this photo of Dude, Sweet Chocolate’s Katherine Clapner and wishing we were sitting across the table from her enjoy a glass of red and Katherine’s “Ice Box” of Chocolate pie made with three origins of chocolate semifreddo, brown butter-dos hombres ganache, and Wackyms cookie crumbles special sauce. Nope not us. (This is obviously a lie. Katherine call us!)
Manny Rodriguez

We have entries to ogle this year drawn from a more diverse group of chefs—Nikky Phinyawatana with a matcha pie and Uno Immanivong with a Thai tea-infused chocolate mousse.

I love that we can count on that: pies as diverse as our city.

All this to say, ultimately, that the pie line-up this year is not about the pies. These chefs have lived through a grueling, harrowing year in an industry in flames. To see swatches of unbridled creativity is utterly life-affirming.

They all seem to say, Throw us into any context, and we will thrive. We will bring ourselves to the table.

I look back to Bon Appétit naming us Best Restaurant City 2019, and not that that is a metric of anything more than … well, what it is. But I think to myself, yes, this is a good microcosm of what that was all about. 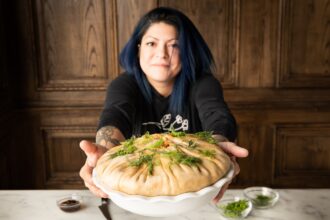 Pork Dumpling Pie: What is a dumpling? What is a pie? Chef-owner of Petra and the Beast, Misti Norris, gets down right philosophical about it via a large dumpling pie filled with smaller pork dumplings and surrounded by pork and vegetable dumpling mix.
Manny Rodriguez 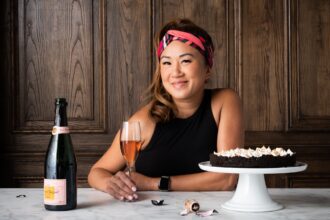 What: The Piehole Project virtual pie auction
When: October 18-28
Where: Online here. Or text PHP2021 to 843-606-5995 to create an account and bid on the pies.
If you want to attend the Piehole Project Live! Variety Show on Oct. 28, buy tickets here.