Between Detroit-style pizza and Nashville hot chicken, we couldn’t decide which one dominated food trends of 2020. Well, we might have the answer: even more hot chicken is coming to Dallas.

Last year, we knew a certain Nashville joint had its sights set on Dallas and planned a 2021 arrival. Now we have the latest on Hattie B’s Hot Chicken, which plans to open its first-ever Texas location in late February or early March.

If you’ve walked around Deep Ellum at all in the last year, you’ve noticed the utterly gutted space at 3000 Main Street right across from AllGood Cafe. It’s there that the 5,800-square-feet space (original brick walls still intact) will eventually have room for 200 diners, inside and out, and where Hattie B’s famously crispy and juicy fried chicken will prosper. 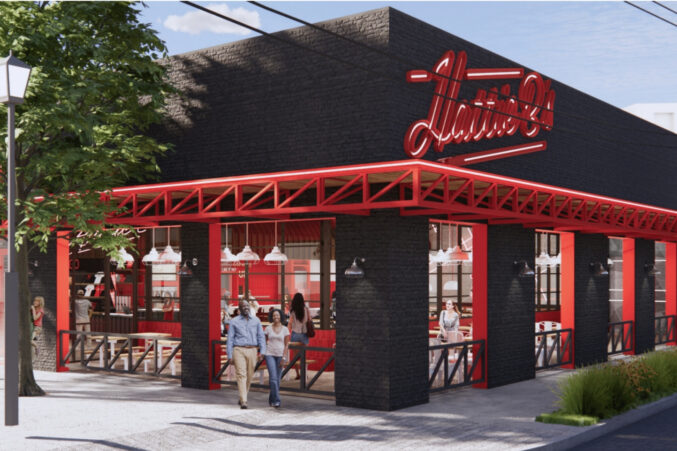 Rendering of the eventually, soon-to-open (hopefully in either February or March 2022) Hattie B’s at 3000 Main St. in Deep Ellum.
Michael Hsu / Office of Architecture

When it opens, you’ll find a menu of platters (jumbo tenders or wings, served “hot” or “not”), sandwiches, whose chickens can come with “no heat” or cranked all the way up to “SHUT THE CLUCK UP!!!” Plates come in a whole manner of bird part combinations (dark meat or white, legs, thighs, or breast—you decide), plus two sides, such as pimento mac and cheese or black eyed pea salad.

The dessert list is short and sweet: seasonal fruit cobbler, banana pudding, root beer or Coke float, or ice cream. Expect a few of both local and domestic beers and a casual dining setup.

Come 2022, this will be the ninth Hattie B’s outpost and only its fourth location outside of its home state of Tennessee. Founders and father-and-son duo Nick Bishop and Nick Bishop Jr. debuted the original Hattie B’s in 2012 and has been expanding out of state since 2016.

It’s not the only chicken import to bring fried bird to Dallas recently. Gus’s World Famous Fried Chicken (not to be confused with Nashville hot style), another Tennessee export, opened in Deep Ellum in September 2020.

Although Hattie B’s won’t open until early next year, the hot chicken waits for no grand opening. The restaurant will post its food truck, a 1974 Airstream, throughout Dallas from November 5 to 7 for a weekend of spicy pop-ups.

Nov. 7, 1 to 5 p.m.| BrainDead Brewing
This time grab an order of hot chicken and belgian waffle with berry compote and maple whipped cream, and/or hot chicken with bacon-cheddar grits.

Get D Magazine for a Deal