Juan and Brent Reaves, owners of Smokey John’s Bar-B-Que, can’t get on an elevator without someone saying something. “If I get onto an elevator right now,” Juan explains, “and other people get on, too, there’s gonna be a guy that’s like, ‘I know this sounds weird, but you really smell great.’ We’ve gotta figure out how to make this a cologne.”

It’s a typical comment from any good pitmaster. The smell of the smoker follows you, for better or worse. And in the case of the Reaves brothers, it’s clearly for the better. There’s a line of avid regulars trailing out the door of Smokey John’s at 11:15 a.m. on a Wednesday.

But that line wasn’t always there. There was a time, just after the Reaves brothers lost their mother, when the restaurant was hemorrhaging money. “We were losing like $8,000 a month. My mind was blown,” Brent says. They had to do something. Fast.

“I started going out into the neighborhood passing out coupons. I’d take $50 out of the register and go make copies of the menu on orange paper. I would walk every morning and pass out flyers to every building, every person– everywhere.”

Brent remembers, “And one lady, this older lady, she took a menu and she says,” Brent puts on his best high-pitched nice-old-lady voice, “‘Oh! Y’all have a little barbecue place down the street!’”

“I said, ‘Yes, ma’am!’ And she goes,” (Brent mimics the lady taking the paper and shoving it up against her own nose, sniffing it like a kid with a scratch-and-sniff sticker. She’s disappointed.) “‘It doesn’t smell like anything!’”

He went right back to the restaurant, took another $50 out of the register to make a new set of copies. Only this time, “I put them in the smoker overnight,” Brent says with bright eyes.

“So, the next morning, I came back out and I hit all the same places all over again. And about 11:15, all these people start coming in the door with this flyer. Catering started coming in like crazy.”

For two guys who have been through the deep-fried ringer over the last few years, Brent and Juan Reaves are just. So. Dang. Happy. Their barbecue joint had a major fire in 2017. Then, the pandemic hit. There were constant supply chain issues. Signs are posted all over the barbecue joint about the skyrocketing price of meat. Despite it all, these two are laughing and joking around with each other everywhere you see them. They’re startlingly happy. 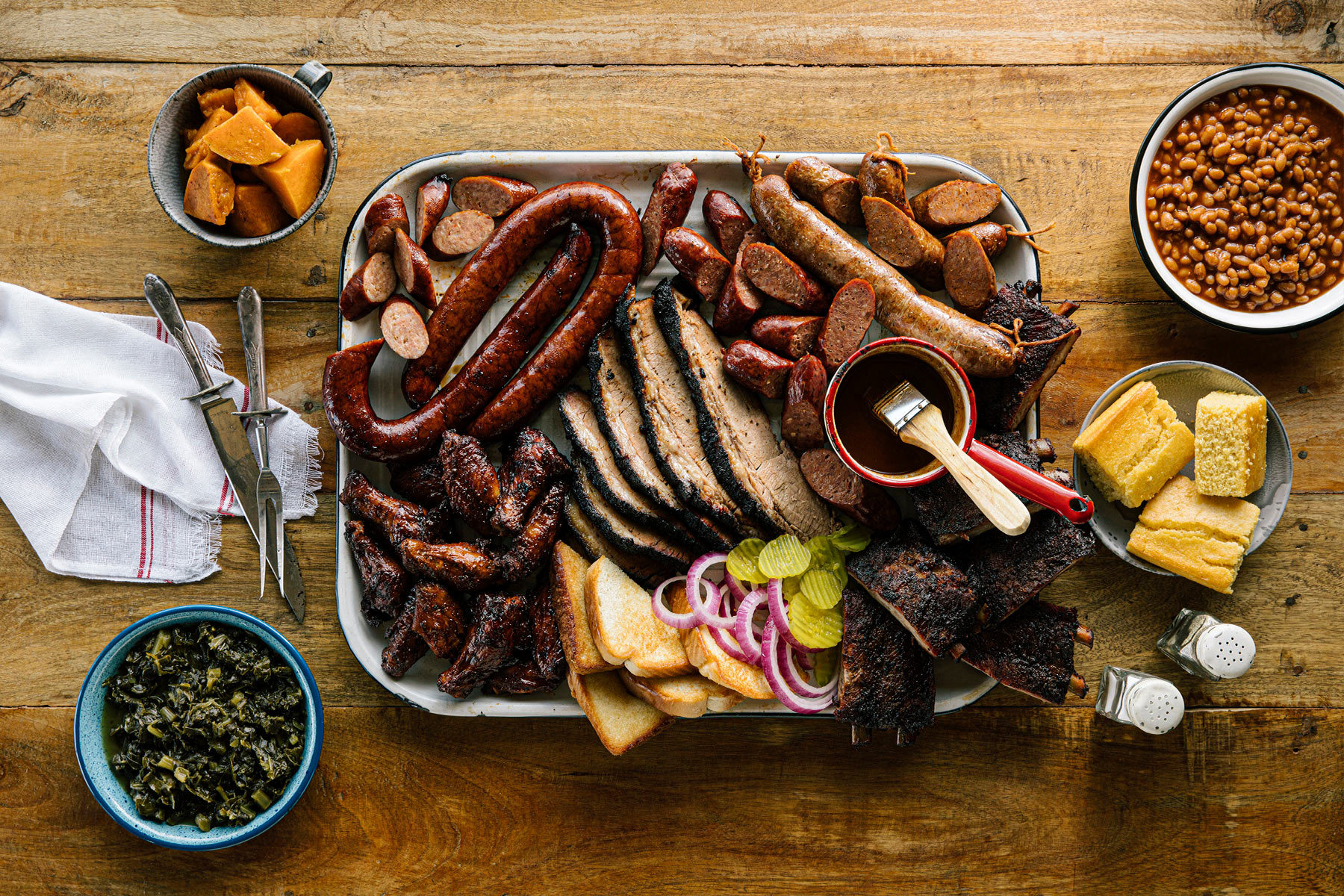 And you know it’s not an act because it’s contagious: they walk into the room smiling and laughing, and suddenly you find yourself having a good time whether you wanted to or not. They’re happy like a toddler in a pile of remote controls. They’re happy like two guys who just found out they get to pick which actor gets to be the next James Bond. Or that because of some magical portal that they found in the deep fryer at one of their booths at the fair, they get to time travel with Tom Hanks.

What if we let the Reaves brothers speak as the voices of Big Tex at the State Fair of Texas this year? Let them say, “Welcome to the Great State Fair of Texas,” because they genuinely mean it. Would this start a domino effect of smiles throughout Texas, leading to at least one or two of the world’s problems being solved? Yes. Yes, it likely would.

And if that wouldn’t do it, their Fried Reese’s will.

“We’ve already done 14,000,” Brent says. On the other side of the wall, their staff is unwrapping thousands more Reese’s peanut butter cups, just like Veruca Salt’s warehouse in Willy Wonka, and then dipping them in batter to be fried at the State Fair of Texas in two weeks.

Are they worried about being responsible for a global shortage of Reese’s peanut butter cups?

“We definitely are the ones, if you go to the suppliers and it looks like they’re short on Reese’s. It’s us,” Brent says.

In addition to being the creators of Fried Reese’s, The Reaves brothers were the minds who brought you Fried Jell-O, Deep-Fried Bacon-Burger-Dog Slider On A Stick, Deep Fried Sweet Potato Pie, and Big Red Chicken Bread.

A win in the Big Tex Choice Awards can mean an incredible spike in revenue. For Fried Jell-O, the Reaves brothers partnered with a long-time family friend, Miss Ruth, who owns two Ruth’s Tamales concession stands at the fair. The item was so popular, according to Brent, that Miss Ruth brought in “2.5 times more than what she normally did” that year.

Juan remembers, “She cried. When she got her check, she cried.”

But it’s not enough to win once. Every year calls for a new idea if you want the free buzz from the State Fair of Texas marketing machine. And the competition keeps getting fiercer.

“The challenge to win BTCA (Big Tex Choice Awards) is that it’s a culinary game now. You can’t just take a sneaker and drop it in doughnut batter and drop it in the fryer and put some powdered sugar on it,” Juan says.

So, every year, they sit at their conference room table and come up with new ideas to hopefully win that Big Tex trophy. Juan is the idea man, and Brent is the one who typically deep-fries Juan’s big ideas into reality. Their brisket brittle and crispy crazy corn made it into the finals this year, but neither snagged a trophy.

But are they stressed out that they didn’t win? Of course not. They say it’s all right. They say it’s all about faith. They say if you really believe, then it’ll all be ok. And sure, that works. But also, would you be worried if you had “Deep Fried Stuffed Baked Potato” on your menu at the fair? It’s a mound of French fries piled high with all the classic baked potato fixins: sour cream, butter, chives, bacon and cheese. And then, they add brisket and barbecue sauce just for fun.

The Reaves brothers are also bringing back the Taco Cone, which starts with a deep-fried corn tortilla shaped into a cone. Then, they fill it with cilantro lime rice, black beans, barbacoa, queso fresco, pico de gallo, and crema. It’s a Godzilla meal perfectly designed to sherpa you through a beer-filled day of poor choices at the fair.

Now, the fair is only open 21 days, but Smokey John’s Bar-B-Que is open all the time. When you go, congratulate them on the restaurant’s 45th anniversary and order the Steve White. It’s a secret menu item, and that selection gets a booming, “Great choice,” from the guy in the neon construction vest behind you in line. Two ribs, two fried catfish filets, two sides. Get yourself the mac & cheese and candied sweet potatoes. Ten minutes after you sit down with your order, the only evidence of this meal will be two sparkling clean pork rib bones.

And if you ever see Juan and Brent Reaves on an elevator, don’t worry: It’s OK to tell them they smell nice. They know.