Welcome to SideDish’s weekly dispatch of need-to-know News Bites, from quiet closures to opening updates and everything in between—and back to coronavirus updates!

The Detroit pizza ghost kitchen concept from the pie wizards behind Cane Rosso and Zoli’s is officially settled into its new home at 7328 Gaston Avenue. Yep, that’s right next door to its pizza sibling, Cane Rosso. On that note, owner Jay Jerrier has a word (and I rarely if ever take quotes from press releases, but this is too good: “Ultimately, Detroit- style pizza is so different from the soggy pizza tortillas that we make at Cane Rosso, we didn’t think that we’d be competing with ourselves too much…. Believe it or not, you can have pizza more than once a week…I’ve been doing it for years, and I’m the picture of health!” 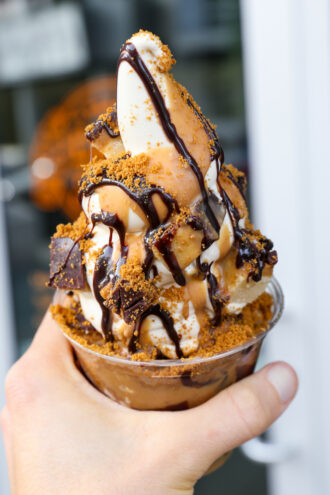 Also newly opened, or returned rather, is Cow Tipping Creamery with its small ice cream counter set up inside of the Thunderbird Pies space. Cookie butter soft serve, I am coming for you, darling.

The Mockingbird Station pub literally gave Dallas an Irish goodbye, quietly closing without so much as a Facebook post saying, “We’ve slipped away while you were at the bar getting another round.” After 20 years, the lease was up. This Dallas Morning News

McKinney barbecue fans can rejoice in the return of Hutchins BBQ, which had closed to fix damage sustained from a fire earlier this year. As of Aug. 31, its back with dine-in, takeout, and drive-through service at 1301 Tennessee Street. Not only is it back, the Hutchins team has welcomed award-winning barbeque craftsman John Mueller, the grandson of famed pitmaster Louie Mueller. With Mueller’s arrival comes new sausage offerings, such as peach habanero and blueberry maple, with more specials to come.