Olivia Lopez knows and loves masa, the base for tortillas and tamales, in all its forms. Mostly because she loves the possibilities of maize. When Lopez was growing up in Colima, the coastal state west of Mexico City, she ate the tortillas her grandmother made, grinding the slaked lime-soaked corn on a stone metate.

Now, the 31-year-old cook, who was sous chef at Mirador under Junior Borges and Josh Sutcliff and more recently chef de cuisine at Billy Can Can, is taking all of her experience and turning it into gorgeous tortillas and tamales. They’re made from nixtamalized heirloom corn, which is to say kernels that have been soaked in a lye solution to release the outer layer, rendering them tender and easier to grind. She’s selling them under the name Molino Oloyo.

Beyond her childhood, it wasn’t until her family began frequenting a Colima restaurant known for its breakfasts and brunches that her vision expanded. People would come from near and far to drink hot chocolate and eat plates pooled with refried beans and queso fresco. A huge patio sported red plastic chairs and bright tablecloths and umbrellas under a jungly canopy of trees within sight of the Colima volcano.

“That’s when I started seeing the blue corn,” Lopez says. “They were making tortillas.” 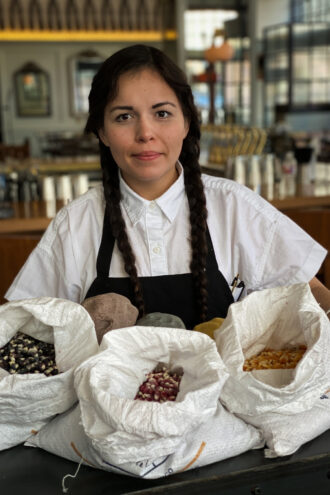 That model blossomed into an object of obsession and led her to where she is now, staking her faith and passion on the endeavor. “It takes a lot of courage to do something like this,” she says.

But she’s been building up to it. In 2018, Lopez took six months off to research maíz at the source. What she found was vast. Trips home had become reconnaissance missions. “Every time I went back, I found smaller and smaller communities,” she says. “I started sourcing things on my own. I found an area, and in that area, there’s about 200 different types of heirloom corn.” That landscape, near Tuxpan, on the border of Colima to the south and Jalisco to the north, is home to a corn cooperative. “They protect the seeds,” she says. “They helped me a lot.” Corn from places like this and others is behind her beautiful tortillas, swirled in rainbow colors.

In this she joins other influences and compatriots. Enrique Olvera started the movement in Mexico City. In Guadalajara, there is Xokol.

Back in Dallas, Lopez bought a molinito, a small grinder, and began using corn from Los Angeles-based Masienda, the darling of the U.S. heirloom masa world. Its wunderkind founder, Jorge Gaviria, at age 28, started beating the drum. The next step for Lopez is to get her corn-growers on others’ radars. “I spoke with Jorge,” she says. “I said, you may have enough vendors, but if you are ever interested, they have this type of corn. I sent him pictures, I sent him all the information. He said he’ll find a way [maybe] to connect with them and start bringing [in their] corn.” Tatemó in Houston also sources corn from different parts of Mexico; she’ll reach out to them as well. Her mission involves exactly these connections.

“The point of the food that we’re making is to showcase the quality of the product, to get more people buying heirloom corn. I don’t want to be the only one doing it. Because [when] we support [growers], we give them a reason to grow,” she says. “The whole goal is that everyone can have access. We’re gonna start bringing back these communities. That’s one of the [biggest] things—my reason.” 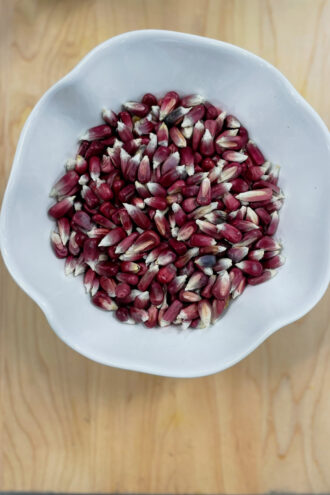 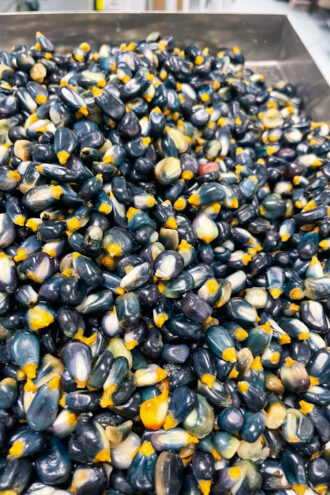 On a recent weekend, I score her vegetarian tamales. The layer of sweet, pure, gentle, docile white-corn masa cradles the plant-based filling. I try one, still warm from the paper sack, and immediately wish I’d ordered two dozen. A sweet potato purée peeks shyly out from under a heft of vegetables, like rajas, but amped up with golden raisins and slivered toasted almonds as well as carrots, diced and sautéed. It’s heaven, a marvel.

Each is snugly tied in a banana leaf that imparts its grassy flavor. The accompanying sauces—a deep, oily red one and a roasted tomato one that’s bright, energetic, and feisty with lime and garlic—are stunning. That we can get such tamales means gold.

Previously, I tried the blue-corn version filled with a pork verde. I tried the chicken ones with a rojo sauce, in a sunny yellow-corn masa wrap.

Every corn has different properties. Some better for tamales, others for tortillas. “I’ve been finding I’m in love with the pink and purple,” Lopez says, because of their versatility. Currently, she has five different varieties. Blue cónico from Estato de Mexico and Tlaxcala, whose purple-blue kernels yield deep blue tortillas, like a sky just after dusk; bolita belatove, with rosy, blushing kernels; bolita amarillo from Oaxaca, coarser and better for tamales, tinted like a sunny, yellow-orange yolk. Chalqueño amarillo from Tlaxcala yields pillowy, ethereal tortillas. Xocoyul rosado looks like pomegranate seeds, deep garnet red. Right now, she’s expecting a shipment of corn from Yucatán. 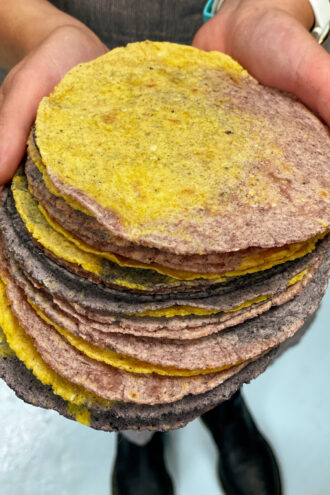 Her banana-leaf offerings are tied to her grandmother and her home region, where banana, guava, mango, tamarind, coconut, and pineapple trees abound.

“The reason I used [banana leaf] is because there was a lady my grandma used to buy breakfast tamales from,” the specialty called ash tamales (tamal de ceniza), always wrapped in the fragrant leaf.

In the future, she’ll also, maybe, if we’re lucky, offer these. In the meantime, she’s branched out with sweet tamales. For fun, during cherry season, she fashioned cherries into a compote, which she folded into masa made with coconut oil and almond milk, then topped each with the fruit. She plans to incorporate fall fruit as well. Look for them in her future offerings.

How should you appreciate a tortilla? The aroma, the texture, the smell of the nixtamalized corn. She hopes to defy stereotypes.

“Many times I was told this was not gonna work here, [that] people would not pay for this,” she says.

She’ll persevere. Ultimately, she would like to open a brick-and-mortar along the same lines as Olvera’s Molino el Pujol in Mexico City. She would like to twine her to-go tortillas and tamales with plated, elaborate dinners that would draw on her deep roster of skills. (So far, she’s done a few private dinners, including one for which she built a trompo and made tortillas, hot and fluffy off the comal. Others might involve a brown butter-chanterelle tamal and toasted corn ice cream.) In that sense, she would have not a restaurant, but a shop that crosses borders. 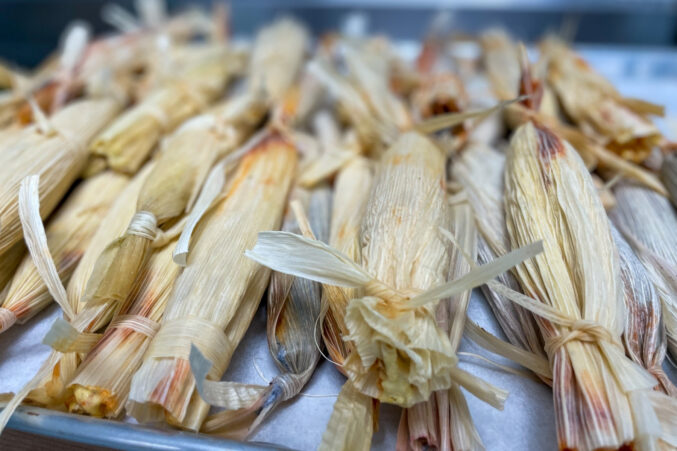 Never Too Many Tamales: Olivia Lopez makes her tamales by hand for to-go or delivery, but dreams of opening a proper brick-and-mortar soon.

Looking back at the origins, she’ll reflect on the journey she began with Molino Oloyo, a word that in Nahuatl means the cob of an ear of corn—rainbow-hued or otherwise. But let it be rainbow-hued.

Scenes from the Chefs for Farmers Friends of the Festival Dinner