Finding the exact location of the State Fair of Texas Big Tex Choice Awards judging at the fairgrounds always feels like a top-secret mission. Enter at Gate 5. Then, casually cruise past police barriers like someone who has a true life’s purpose. Keep driving even though Siri says you have arrived (you haven’t arrived). Take a confident left when you see someone else take a confident left. Drive over three funky fresh horse doo-doos. Follow a lady with a patriotic-stars-and-stripes-painted Louis Vuitton shoulder bag through the doors, and you’re there.

When you finally open the door to the Big Tex Choice Awards judging day, the feeling is always the same: kid in secret fried candy shop.

Normally, the Big Tex Choice Awards Finals are held in a large building that smells of hot fryer grease and potential. But this year isn’t quite normal. While the media attended the finals in person, no public attendees were allowed and competition was broadcast live on Facebook. Nobody said, “Ladies and gentlemen, start your fryers!” like they usually do, because the concessionaires were frying items backstage in a more controlled environment. You couldn’t watch the competitors frying their foods for the judges, stressing out over whether that dusting of powdered sugar on top was picture perfect for Uno Immanivong’s impending Instagram posts. The familiar fryer grease pop was missing—sizzle-less.

Instead, you’re watching Little Big Tex (a dude in a Big Tex costume) try to liven up the crowd of literally tens of mask-muffled onlookers. He waves his arms up and down, trying to get the group excited. He poses center stage for local TV B-roll footage in a quiet room.

Soon, extremely serious judging commenced. Sure, Deep-Fried Halloween is mostly candy and whipping cream. But a whole lot is riding on those Reese’s pieces. When this celebrity panel of fair food experts names the winners for Most Creative, Best Savory and Best Sweet, they’ll be serving up these concessionaires with a line of eager customers. Each win at the Big Tex Choice Awards translates into a spike in sales for the lucky concessionaire who takes home the prize.

While the concessionaires popped Xanax (how has deep-fried Xanax not happened?) and waited for their results, the judges got judge-y:

“It’s unique. It’s huge. It embodies the State Fair.” — Chef Uno Immanivong of Red Stix on The Armadillo in the sweet category

“It’s a crab rangoon that used to fly.” — Chef Kent Rathbun of Catering By Kent Rathbun on Lucky Duck Dumplin’ in the savory category

“I tore it in half and all the cheese started goozing out.” — Chef Tiffany Derry of Roots Southern Table on Lucky Duck Dumplin’ in the savory category. (Extra points here for the term “goozing,” which seemed to be a combination of “gushing” and “oozing” that was meant to be delightfully positive rather than a terrible problem that would need medical attention.)

As the judges tasted dish after dish, it became clear pretty quickly that they were enjoying this way too much. In the past, when Fried Beer was a finalist, a judge spat it out almost as soon as it hit her lips. Years ago, it was very clear when the extra waters weren’t enough for the judges and a dish was far too salty. But this year, the judges seemed to like everything. Even the “smallest, cutest bottle of Tabasco!”

The judges seemed to dub every entry into the finals “amazing” and “delicious” and “really, really good.” But, as The Highlander never said, “There can be only three. Well, fine, in this case—which is a really unusual case—there can be only two.” In the end, Deep-Fried Seafood Gumbo Balls took home the awards for both Most Creative and Best Savory. The award for Best Sweet went to The Armadillo. 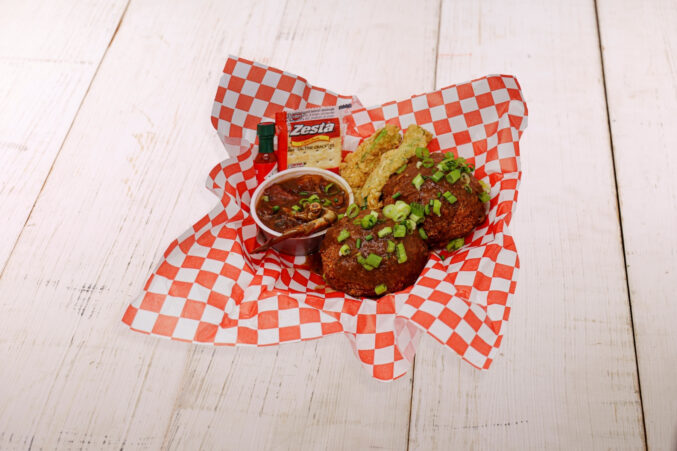 But the Big Tex Choice Awards is about more than just naming a deep-fried winner or two. It’s about kicking off the State Fair of Texas season in a crazy way. On this day in history, people scream-cheered for Deep-Fried Halloween. This was the day that Donovan Lewis hugged brisket brittle as if it were his own baby newborn while he moaned happy words about it into his microphone. On this day, people oohed and ahhed at the taste of a deep-fried Armadillo while the man who invented it played a song on his ukulele about the aforementioned armadillo. On purpose. In front of local media.

It was all very weird. And somehow we were all winners. Which is exactly what you should get for the price of admission any day at the State Fair of Texas.

D Magazine Deep-Fried-Fairgoer Pro Tips: Dunk your Deep-Fried Seafood Gumbo Balls in your beer. And since The Armadillo is basically a giant ice cream sandwich, be sure to eat it in the shade.