Graham Dodds is the viceroy of vegetarian fare, bringing magical mushrooms—no, not the psychedelic kind!—into our midst.
By Eve Hill-Agnus | August 26, 2021|12:21 pm
Advertisement

You don’t need me to let you know that vegan and plant-forward food is having a moment.

At an infamous meeting in Denver that landed him the job, Graham Dodds cooked an exceptionally remarkable paella for the management team of the Kimpton Pittman hotel, where he is now Elm and Good’s executive chef.

It was February of last year, and the vegan mushroom paella was hearty and hearth-cooked, with plump grains of Bomba rice, a trumpet-mushroom “chorizo” piperade redolent of paprika (a twist on a Basque country staple), and pan-seared lion’s mane mushrooms fanned on top that stood in for scallops. The textures were remarkable; it was meaty and satisfying. “They called me the mushroom whisperer,” he said over the phone when I talked with him soon after.

But it wasn’t for the paella only that I found myself pointing my compass towards Elm and Good on the edge of Deep Ellum on an evening last week. The menu had debuted a lion’s mane mushroom “crab” cake that caught my fancy and eye. I was eager to try it. 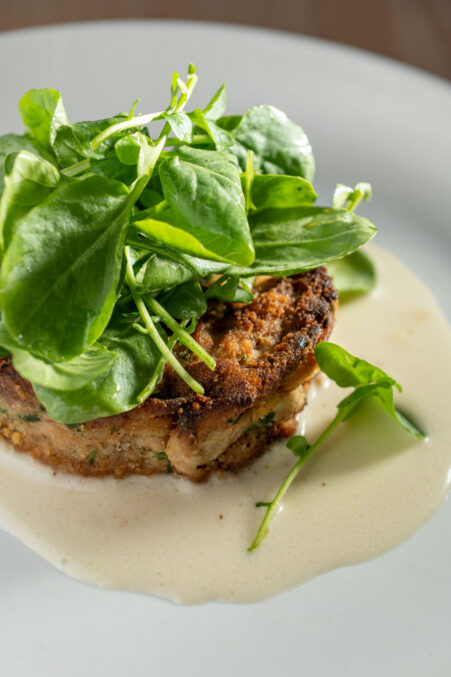 The tidy little appetizer is in keeping with other things on the menu that are yoked in their vegetal echoes and leanings. (Remember that wonder of a tomato tartare served in lieu of a steak tartare at Wayward Sons, with an ingenious egg yolk fashioned from corn? It’s here.)

But mushrooms have always been a creative Muse for Dodds, nor is he the first to exploit their potential. And while he is certainly not the first, he has been a leader, and he does so beautifully, with a particular love and skill. (This is, after all, a chef who forages for morels on hard-won weekend days off in the fall.) It’s right on point as a voracious appetite for plant-based dishes and a new, meat-eschewing reality has increased.

Like many in town, he’s using mushrooms from Texas Fungus, which grows them in a 2,000-square-foot space in Arlington that blooms with a lunar bounty: fast-growing oyster mushrooms in shades of pastel pink, blue, and sunny gold; white elm and fluted Italian; the silky white puff of lion’s mane, with its crabmeat texture; and king trumpet in the winter. They’ve added more as cooks use them for tacos and braised game and po’boys.

“There’s really not much to the ingredients,” Dodds says of the “crab” cake, but that belies the complexity that makes them memorable.

He shreds the lion’s mane mushrooms and seasons them with salt, garlic powder, nutmeg, and celery seed. He adds a touch of aioli, egg yolks, fines herbes, and a dusting of cracker crumbs, lavishing on them the same treatment as a Maryland-style crab cake. The cake comes piled high with watercress and lolls in a gorgeous pool of beurre blanc sauce made with the “tea” that comes from squeezing the sautéed mushrooms.

It’s delicious, beautifully presented, and I’d not be sad if it was on my docket five days a week. If this team thought the paella would be the only fungal (ahem, not viral) hit, they were mistaken.