It has been a moment since we have spoken about the chef Ross Demers. Not because he has been on a remote island or hiding from the pandemic in a cave, but because, as when he opened On the Lamb, the restaurant in Deep Ellum that shuttered in 2016 (breaking my heart a little), he has been taking his time to debut his new project, Cry Wolf. Now he’s on the brink of opening at 4422 Gaston Avenue, with a projected date of mid-September.

As you will recall, at On the Lamb, Demers’ food redefined bar bites, creating a place that pushed the boundaries of expectation, with house-cured Australian biltong snuggling up next to merguez sausage in a tagine with sherry lentils and a duck egg. But he dreamed of something more.

What is clarified now are the contours of a passion project and a menu that will be unlike most in town.  The menu, which will showcase seasonal produce, will be printed in a way that Dallas hasn’t yet found many chances to wrap its head around, but reminds me of restaurants I used to frequent in San Francisco: one sheet offering a progression of items by price. Not a breakdown of starters and appetizers, but a fluid model, each dish conceived in its own right as a set piece in an intuitive mix-and-match. It’ll give him leeway.

“It’s just gonna be whatever you want to do. If you’re in a rush, or you have other stuff going on, have some grilled razor clams and get out of there. Or have a four-course dinner. That’s totally cool, too,” says Demers.

An “idea” person, Demers functions best like an Impressionist, capturing effects of light and grounding them in technique. It’s what he’s calling “fine dining in disguise.” Expect a West Coast sensibility and West Coast fish, plus a parrilla grill on which he hopes to throw prawns and those razor clams, vegetables, and maybe the parts of a chicken galantine for two. He’ll “probably keep some $125 steaks [for two] lying around,” from 44 Farms or A Bar N Ranch, though this will definitely not be a steakhouse.

It’s a place where the wine list, under general manager Tim Case, will be food-friendly, including an array of Greek wines, nebbiolos, and tempranillos.

For dessert, Demers may experiment with sending out simply a couple petit fours and a complimentary tea at the end of a meal, “just to test that out and see how it’s perceived. Maybe it’s cool, maybe it’s not.” 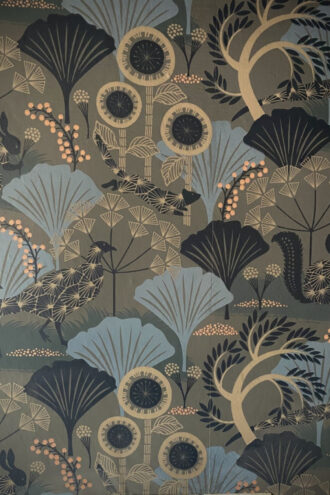 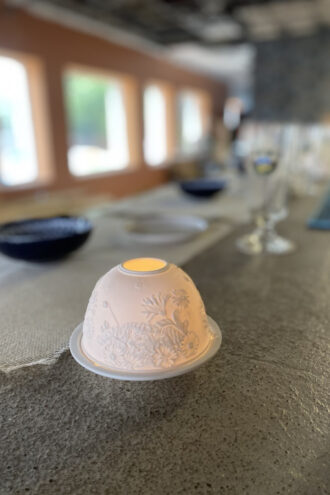 Ross Demers
While Cry Wolf is breezy and nonchalant, votive candles and fine service—and serious culinary skill—make it what Demers is calling “fine dining in disguise.”

After On the Lamb, Demers opened the bistro Beverley’s as sous chef, then took on a position at Flora Street Café. (He had worked at Stephan Pyles’ namesake restaurant years before.) The closure of Pyles’ Arts District restaurant two years ago led to a gestation period, though Demers has been envisioning a project like Cry Wolf for almost a dozen years.

And specifically, recently, he imagined a house for the ideas floating in his mind in a space on Gaston Avenue that he drove by frequently. He saw that “the size, the space, the layout” was a dream. In that sense, “I’ve been working on this for literally four years, being patient, laying low,” Demers says.

The pandemic slowed everything, but he signed the lease last August.

“Patience has been the name of this thing ever since. Just being patient and letting things happen as they come,” he says. “And in some ways, it’s changed things for the better. I’ve gotten to put this together piece by piece.”

That interior: “I don’t know, welcome to my brain,” he says, chuckling. This means cedar wood, a lot of clay shades, oceanic and forest hues—a panoply of natural tones. “It’s kind of just that L.A. bungalow,” he says.

Sip cocktails at the 14-seat bar of poured concrete. (All seating counts, Demers reminds us, are subject to change. “We’re going to change and adapt to how diners are doing things,” he says.)

“I’ve been working on this for literally four years, being patient, laying low.”

A banquette will harbor seven tables—four-tops and two-tops—that will be for reservations. There’s a tiny nook lounge area with four tables: a grand total that hovers around 30 inside. A couple of bistro tables will likely welcome guests out front. And tucked along the side of the building, outdoor seating for about 25, along an eastern-facing wall, cooled by a natural breeze that blows through.

In the kitchen, the small, scrappy team will include Demers alongside Liam Byres, most recently at Homewood, but before that Fauna, the tasting-menu restaurant niched inside Flora Street Café (thus, in some ways, the double helix of Demers’ and Byres’ trajectories interweaves, though obliquely). They will also be joined by Brent Weathers, with whom Demers has cooked for more than a decade; and one person doing bread in the morning.

He’s among those pushing towards meaning and depth—not Instagram bait. He looks to other chefs “just humbly doing [their] thing,” like Misti Norris and other chefs whose neighborhood he now shares.

“I’m opening myself up and being very vulnerable to the masses,” but that is the intent. Ideally, when he or any chef is cooking with his or her heart, “[diners] feel like they know me without saying a word to me.”

At the end of the day, the restaurant is “a full-blown extension of who I am,” Demers says.  That is, a bit of a rogue, a bit of an adventurer, or, as I wrote early this year, when Cry Wolf was predicted to open in February, an impeccably technique-driven place that enjoys playing in the shadows.