On July 5, one buzzy Austin import will open on Haskell Avenue in Old East Dallas: Loro. While not entirely homegrown, the casual smokehouse spot from Aaron Franklin and Tyson Cole has been a highly anticipated arrival since last year (and even earlier). It’s the first Loro outside of its hometown of Austin (a third location is slated to open in Houston later this year).

At the smokehouse, which is a part of Hai Hospitality (the same restaurant group behind Cole’s Uchi and Uchiba), expect a melding of Franklin’s approach to smoked meats and Asian flavors from Cole.

I chatted with the Franklin and Cole at the new Dallas digs about Loro’s arrival at 1812 North Haskell. “I like this neighborhood a lot,” said Franklin, “a good stretch between Petra and E Bar.” E Bar Tex Mex is just across the way, and down the road lives Misti Norris’ fine Petra and the Beast. I will add that one of the city’s best (halal! buttermilk!) fried chicken sandwiches resides on this food thoroughfare at Invasion.

Noting Austin’s often thorny* reception to outsiders, Franklin says he “hope[s] we’re accepted okay around here.” If Dallas’ obsession for anything that’s boozy and churned into a chuggable slush is any indication, I think Loro is in good company. To that end, expect frozen gin and tonics (a hot weather quencher for sure), mango sake slushee, and frozen mojitos on the drink menu to start. 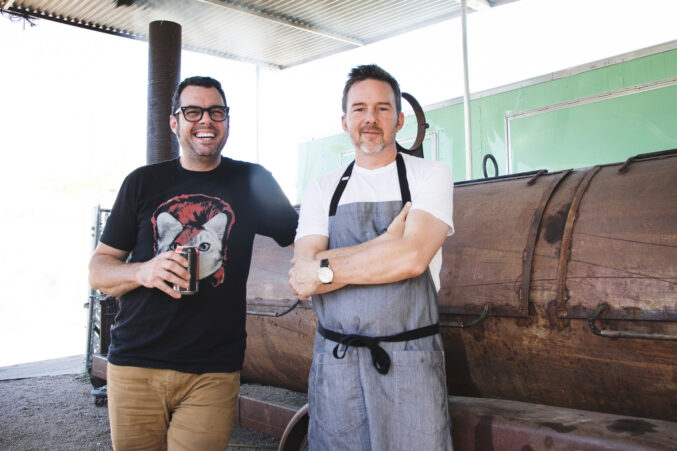 Loro will also have Dallas-only menu items like “a Coney Island-meets-classic British pub” take on fish and chips for seven bucks. Pair it with Peticolas English pale ale. Another exclusive: the French onion brisket melt on rye. Loro—here helmed by chef de cuisine Mike Perez who worked in kitchens all across the kitchens, from making pasta in L.A. to fresh-caught fish in Alaska—promises to bring the same casual vibe you’d find in Austin, except with a strong lineup of Dallas brews. Find wine and sake on tap, plus a rotating lineup of batch cocktails ( ginger Old Fashioned, mandarin margarita, and more). Speaking of drinking, happy hour runs weekdays from 2 to 5 p.m. with happy hour–only items like brisket tostadas and crispy-smoked chicken sandwich.

The interplay of Asian flavors and Texas ‘cue is evident throughout the menu, like a brisket coconut rice that takes cues from Malaysia. Ditto the chicken bo ssam, a refreshing dish where one wraps grilled meat in large lettuce and sauces each bite with dressing, which here is a yellow curry and yuzu vinaigrette. The bavette tacos are smoked and cooked sous vide for a ridiculously tender texture. And for sweets, things are simple: chocolate chip cookie with salted toffee and yuzu peach cobbler with five-spice mascarpone.

*“Thorny” is admittedly an understatement, what Franklin had actually said, speaking for Austinites: “We get pissed…we’ll boycott a restaurant” if it doesn’t come correct. Okay, I can respect that energy!

A version of this story was published in the June 15 SideDish newsletter. Sign up here so you don’t miss the latest food and drink news and stories.