Tiki concoctions can have a laundry list of ingredients—a few rums, plus liqueurs, and some heady sweet-sour-spice amalgamation. They are potent potables, that, when done right, hit the spot. All that to say, Swizzle hits the spot. In Lower Greenville, the newish tiki bar brings back a bygone form of boozing. Read about it in our July issue of D.

The décor? Unabashedly kitsch. The cocktails? Pleasantly strong. Swizzle fills a tiki-shaped void that Trader Vic’s left when it closed more than a decade ago. With so many bars that are designed to be Instagram-worthy first, Swizzle—virtually windowless, dimly lit save for the soft glow of bamboo lanterns—is not, I would say, a selfie hotspot. And good! It’s about drinking rums and juices from a pineapple through a straw with an umbrella.

Where else am I going to scratch that sweet tiki itch? 4 Kahunas Tiki Lounge is for sure holding down the kitschy fort in Arlington. With a newly renovated patio and a new summer cocktail lineup, Knife, too, has dipped into the realm tropical with Chef Likes Tiki in which a duo of rums dance with pineapple and lime juices, banana liqueur, and citrusy Aperol. And I cannot recommend Âme enough—Bishop Arts’ new Indian restaurant with some French flair (you can read Eve Hill-Agnus’ review also in the July issue of D). At Âme the cocktails indeed vary, but the East Indian Swizzle pours dark rum, banana liqueur, and East India sherry over pebble ice for the most satisfying rum potion. 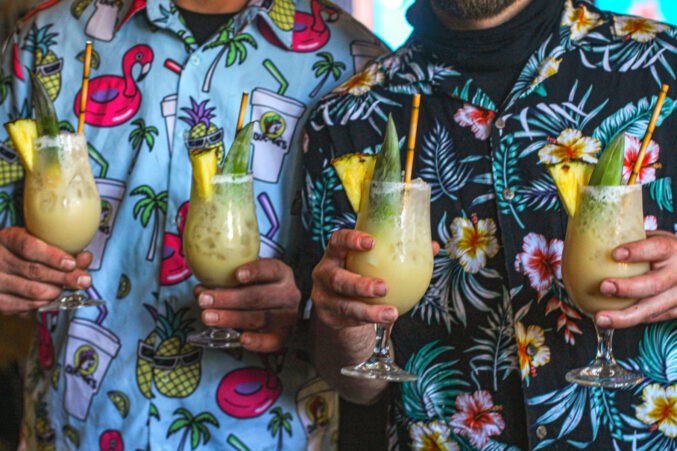 Trick Pony, Harlowe’s detached sister-bar next door, has been keeping the tiki party swinging all season with its Summer of Rum pop-up which runs through the end of August. Faux lei necklaces await at the door, grassy tendrils hang above the bar, fake palms flank the entrance.

On the Summer of Rum cocktail menu—Trick Pony’s ephemeral homage to the tiki cocktail genre—find a mix of both classic tiki and modern tiki. “There are key attributes you have to highlight in order for it to be ‘tiki’,” says general manager and barman Chris Jackson. The Spamala Anderson, for example, arrives in an empty SPAM can with garnishes. What happened to all of the SPAM meat? Well, Trick Pony takes that salty canned goodness and infuses pineapple rum with it. “It adds a little more depth and character to it, and it gives it a bit of saltiness that’s balanced out with dry curaçao, orgeat, and lime juice,” says Jackson. “The good thing about great tiki cocktails is that they’re not all sugar-bombs.”

Then there’s the Pony Punch, a riff on the classic Planter’s Punch here done with hibiscus in lieu of pineapple, assuring a less-sweet iteration. The Old World New Style is made with a five-year rum, banana, and tiki bitters; it’s what Jackson calls a tiki old-fashioned. Alongside Trick Pony’s tiki twists, though, are the classics which deliver on that familiar flavor: Tradewinds, a rum and apricot-lemon tipple, a balancing act of booze and acidity; in the Jungle Bird, the perhaps most garnished of all tiki libations, rum flirts with pineapple and the bitterness of Campari comes through nicely.

It’s a great summer stop whether you want the age-old favorites or the contemporary takes. After August, however, Jackson says Trick Pony with exchange the tropics for overcast London with a British invasion dubbed The London Underground pop-up that will run September to mid-November.

It’ll take after Britain’s fine pubs. The bar will highlight British cocktails with British spirits—yes, Beefeater’s gin and the like—to the sound of British tunes on the speakers. (What I would give for some rain and moody skies over triple-degree heat right now!) Until then, pour us another round of Mai Tais, thank you very much.

An arguably better version of this story was published in the July 14 SideDish newsletter. Sign up here so you don’t miss the latest food and drink news and stories.