Breeze into Far East Pizza Co. in Richardson for a pie on a Wednesday afternoon and find a mix of office workers from upstairs waiting in the lounge area of nondescript lobby furniture alongside walk-ins who have somehow managed to find their way into this labyrinth. While you’re watching CNN, Nidhi Mittal is behind the counter making butter chicken pizza.

Far East is an example of a business tucked inside a mirror glass-fronted office suite that emerged in extremis during the pandemic.

The fusion-minded pies meld flavors in ways that feel utterly instinctive. On the tikka chicken–topped number, the chunks of chicken are orange-tinted and fragrant, marinated in yogurt and the whirlwind of spices that gives this Northern Indian icon its zest. For the butter chicken pizza, the protein nestles in a lake of creamy sauce with mozzarella and Thai basil. They’ve made a kofta rendition that gets a wave of zestiness from homemade spiced falafel balls, pear tomatoes, and basil. Those flavors—a deliberate mix of Far Eastern (Indian) and Western (specifically Italian)—feel intuitive.

Elsewhere on the concise but complete menu are salads with griddled paneer, pastas topped with globs of mozzarella, “Delhi” sandwiches that use naan like pita pockets, and desserts like a creamy phirni rice pudding lush with saffron, pistachio, and slivered almonds. You can sip a masala lemonade accented with cumin.

Nidhi Mittal and her husband hail from Chardingarh in Northern India but moved to Dallas a few years ago. The couple owned the office deli they had dubbed La Cuisine Cafe. When the pandemic hit, theirs, like many office buildings, became a wasteland as employees decamped. 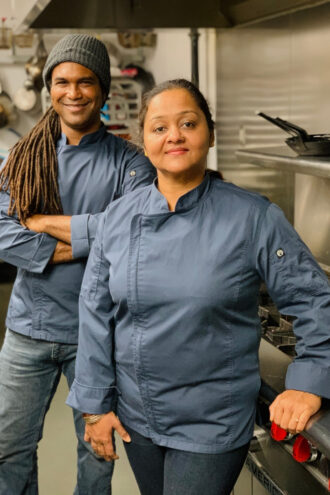 “He is a big fan of my Indian food,” Mittal says of fellow chef Troy Gardner, who had become an acquaintance and owns TLC Vegan Kitchen, which operates out of a ghost kitchen in Garland. An impetus emerged. They floated an idea. “Why don’t we start a different, unique style of pizza from this location?” Mittal asked herself, buoyed. Gardner was the one who created a fusion of her Indian recipes with the pies’ Italian and Mediterranean flavors. Hence the mixes of cream, tomato, and warm spices (all North Indian comfort) with herbs like basil. Mittal and her husband secured permission from building management and now Far East is running full-fledged from 10:30 a.m. until 10 at night.

Where Mittal is from in Northern India—that region nestled between Nepal and Pakistan, where the tandoor oven reigns and naan and creamy curries define the cuisine—she says “people are really crazy about their butter chicken.” The butter chicken is her mother’s recipe, which she made as a special on Wednesdays when the deli was La Cuisine Cafe. People had been nudging, “Don’t you make butter chicken?” Now they make it everyday.

They use naan for the personal 10-inch pizzas and lavash for 14-by-14-inch square pies. (She’s testing dough recipes, hoping to transition to her own naan eventually.) Beef pepperoni and beef sausage top a pie, and all of the meat is halal. Mittal wanted to cater to Muslims and those of other faiths, reflecting the mix of religions in her own country.

This may not be the last or only spot. They’re looking for another storefront in the future, even as they stay in the office complex, where they can’t put up any specific signage and where third-party delivery drivers have to pick up from the loading dock out back once the building closes. (Nothing says “pizza.”)

They had no way to know that the pandemic would nearly silence them before they articulated a larger, grander, more delicious vision. But they’re speaking in their own voice, now.