The aroma of freshly baked goods, hot out of the oven and cooling on racks, is intoxicating. At Carte Blanch Bakery, which now occupies the old Mudsmith space at 2114 Greenville Ave., you can expect to see (and smell) the daily breads and morning pastries right upon entering.

With some of the hurdles that go along with renovating an old space for its next chapter, the opening of Carte Blanche had been pushed from March to June. Carte Blanche opens June 15, with the bakery side following on June 16.

As the briefest of refreshers, Carte Blanche is, by day, a bakery run by pastry chef Amy La Rue, while chef Casey La Rue—yes, the two are married—takes over in the evening for his tasting menu dinners.

Amy has an impressive 25-item bakery menu to start. Sourdough breads, laminated pastries, and brioche doughnuts—a miso caramel one, for example, or a lemon poppyseed cruller—will fill the countertop pastry display. There’s a balance of classic bakery staples and pastries with Amy’s touch, from German chocolate pain au chocolat to danishes using whatever’s in season, like raspberries and peaches.

She employs a certain amount of restraint when it comes to pastries, or, as she puts it, “I like to go a little more delicate on the sweetness” to avoid being an explosion of sugar in every bite. “I want people to come like on a daily basis and have something to eat besides just something sweet all the time,” says Amy. Here, savory will get as much due attention as sweet. Take the spinach, arugula, and artichoke cheese pinwheels or croissant-wrapped cheddar-jalapeño boar sausage—essentially boars in a blanket!—topped with a pickled shishito pepper. (The plan is to incorporate wild game into the morning pastry program as it is with the dinner menu, which used game meats rather than any beef.) 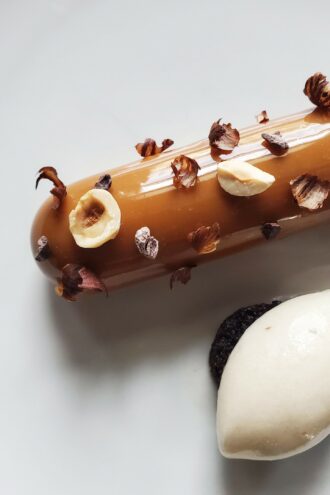 Amy gets to bake in the best of both worlds: morning pastries and dinnertime desserts.
Carte Blanche / Amy La Rue 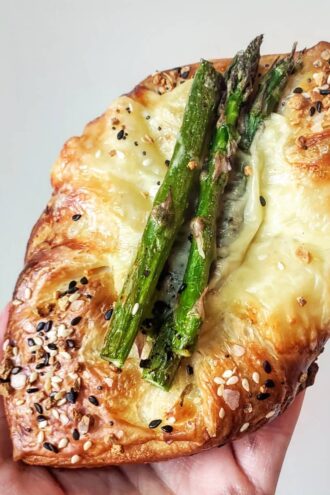 To drink, there will be Richardson-based Eiland Coffee Roasters drip coffee. What Amy’s most excited about the tea program, which will use Rare Tea Company loose leaf. You can order one of their cold tea lattes made with syrups like rooibos ginger, matcha ginger, or an Earl Grey-lavender milk tea. And later, for the tasting menu dinners in the evening, diners can opt for fancy tea pairings for each course in lieu of wine.

It’s this interplay between morning and night that Amy loves. She rolls out comforting pastries and tea lattes suitable for the daytime crowds and later builds desserts worthy of a multi-course dinner.

“This is kind of my dream because I get a little bit of the best of both worlds,” she says. “I get to make my mousses and cakes; I’m going to make sorbets and ice creams here in house to be spun every day for service for the tasting menu.”

Amy, whose love of French pastry began as she watched her father helm a Ritz Carlton kitchen for 14 years, learned the ways of laminated dough and baked goods at French bakery-cafes. Later she worked at the lauded Pelican Hill in Newport Beach then alongside her husband Casey in New Hampshire. Then, it was on to Dallas.

Carte Blanche is among many new 2021 arrivals to which we’ve been anticipating. As the bakery side gets rolling, chef Casey’s coursed dinners will begin on June 15 (reservations are open now).