If you have a sweet tooth and have not added Amaris Riddle to your all-star baker list, it behooves you to do so. Under the name Moon Child Vegan Cakes, she has become famous for nostalgia-tinged pop tarts, which she drops off at Tribal All Day Cafe on Fridays. Seasonally shifting flavors of scones and muffins—lemon-poppyseed, blueberry, and cherry in spring and summer; coffee cake, gingerbread crumble, and pumpkin in fall and winter—make appearances there, too

She wasn’t intending to be a baker. But Riddle has a way with vegan artistry: Bite into a chubby doughnut or spoon up a mouthful of crackling crème brûlée with never a thought of dairy and eggs. A look at her wares proves the ascendancy of vegan baking. She is one of several home bakers that allows us to see how far we’ve come as a city. And where we might be heading from here. 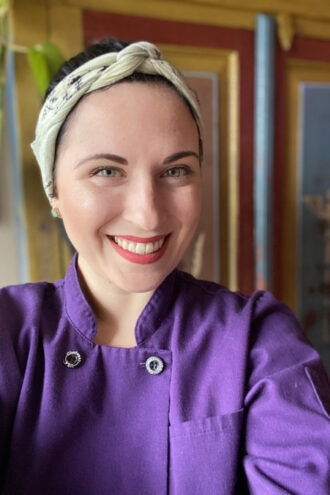 Amaris Riddle donning an apron, perhaps not unlike the ones she'd curl up and sleep upon when she was a kid at the bakery where her mother toiled over frosting.
Courtesy Amaris Riddle 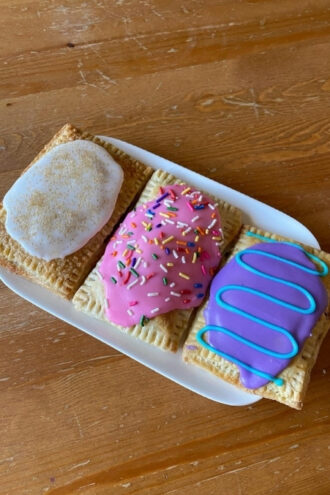 A trio of Moon Child pop parts in all its bright and retro glory.
Moon Child Vegan Cakes

Riddle worked for and then helmed the short-lived vegan bakery Sugar Fang, running it, quirkily, out of Braindead Brewing. There, she made the teal-squiggles-over-violet-icing mixed berry pop tarts—straight out of the ’90s—and punk-pretty skull cakes that became social media sensations. It was 2019. She was recovering from a stint at another shop; an experience that had taught her a lot, but left her rattled. “I poured a lot of myself into Sugar Fang,” she says. But the pandemic struck. Braindead’s owners shut down Sugar Fang and, in October, Riddle opened the business she dubbed Moon Child Vegan Cakes (after her name’s meaning in Old Irish).

Riddle herself arises from a background of cake decorating. As a little girl, she sometimes slept on a bed of aprons under a desk in the bakery where her mother was head cake decorator for 17 years. When her mother worked the overnight to early morning shifts, Riddle woke to the yeasty imprint of doughnut-making and learned to watch others pipe elaborate buttercream roses. She was four. Later, in elementary school, her mom visited her classes to offer cake and do demos.

And perhaps out of a kind of cosmic serendipity, as an adult, the mature Riddle found that nannying and office jobs were never as rewarding as manipulating flour and sugar. When she turned to baking, her mother bequeathed her a number of the spatulas and scrapers and most of the piping nozzles she now uses. The “beat up and loved” cake-decorating nail she holds to make buttercream roses is her mother’s too, a relic from the ’80s. 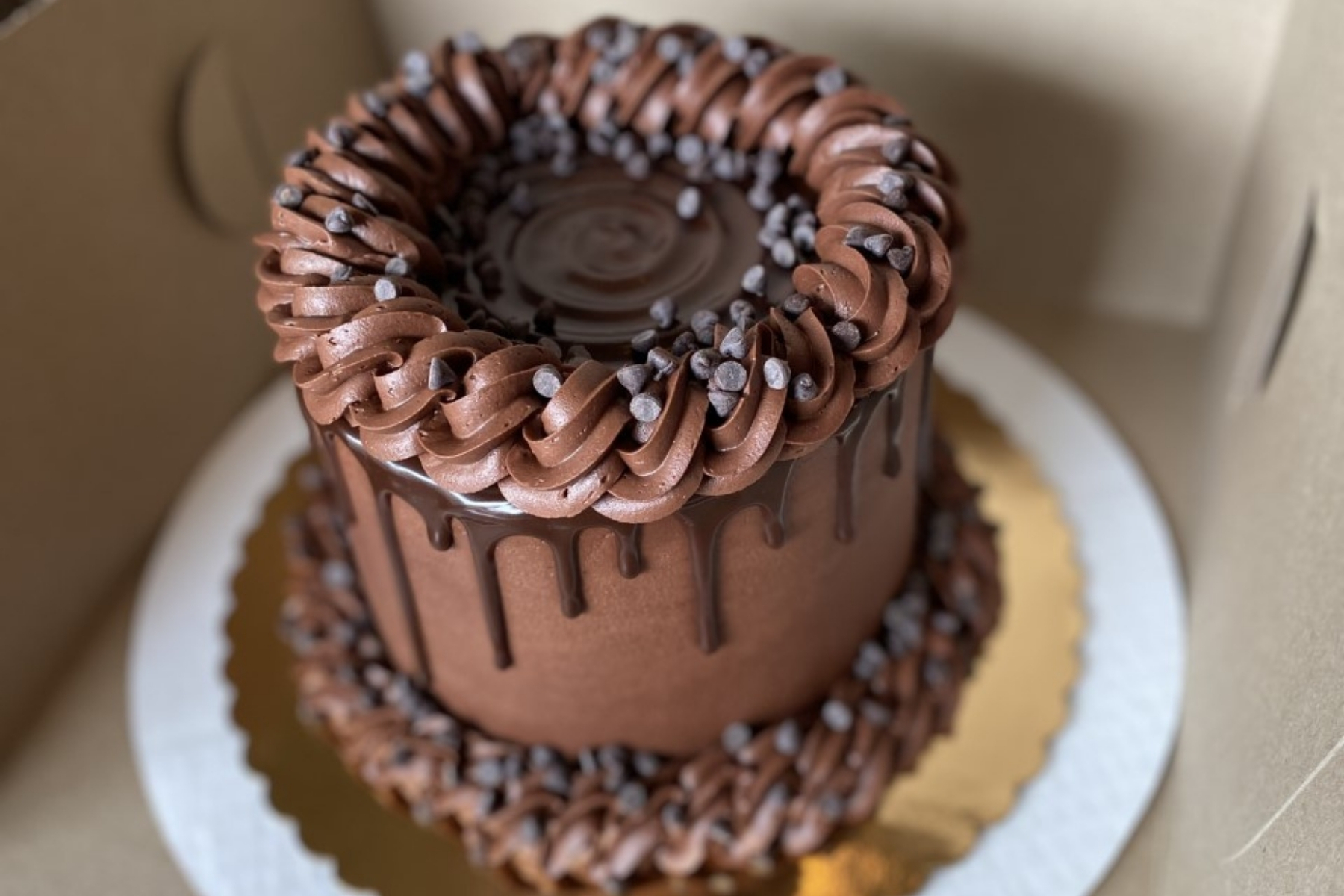 Riddle’s style is far from the elaborate crenellations and billowing braid work and clusters of roses of the ’80s and ’90s. It’s more modern and minimalist, with a little rainbow-hued punk rock and fun sprinkled in. (Still, when she needs help on the finesse of a scraped-pattern cake, say, she turns to her mom.)

It’s taken time to learn what works in vegan baking. The soy-based shortening that makes her frosting creamier and the non-dairy milk that mimics the full-fat real stuff.

What impressed me most, when I dove headlong into her sugar rush–inducing repertoire, was the pot de crème-size crème brûlée, her favorite dessert as a non-vegan, which presents with a torched-sugar caramel crackle and thick as that silken vanilla pudding ever is.

A nostalgic vibe infuses the famous pop tarts that boast a rich, jammy, deeply whole-berry filling, like your best imagination of blue raspberry or fresh strawberry. The summer’s peach pop tart bears a cinnamon-spiced filling and a dazzle of golden turbinado sugar over white icing— conjuring memories of peach hand pies and cobblers she ate growing up. She telegraphs that summer bliss.

Flaky-crusted and with fabulous heft, the pop tarts are crimped from a simple pie crust recipe, but they wow. It’s the same with the doughnuts, in all their sweet, yeasty glory—Boston cream pie or the absolutely certifiable monster of an apple fritter, strewn with apple chunks that have kept their rosy-yellow skins, or a raspberry jam-filled round with sugar crystals you lick off your fingers.

They’re the stuff of daily or weekly nibblings.

A rich banana pudding I admired presents as a pie-sized tub of luxurious vanilla pastry cream, piped whipped cream, and homemade vanilla wafers underneath and sprinkled on top. It’s unadulterated richness and a stunning coup of vegan approximations of texture, which are tricky to achieve.

And then there are the cupcakes, with constellations of golden or platinum sprinkles and silver luster dust hiding her sultry vegan butterscotch and spiced peaches in a cinnamon cake crumb. Cakes that loop her back to her mother—to that time in her life when she balled aprons to make a pillow for her head and slumbered on a bakery floor.

For Riddle there is no bakery floor. She churns all of this out of her home kitchen, with no brick and mortar on the horizon. Her oven exudes heat in the summer; her doughnuts rise sluggishly in cold weather, as they did during the February freeze.

“Now that I’m doing this,” Riddle says, “I can’t imagine doing anything else.”