Mid-January, I pull into the parking of a strip mall to which I’ve been directed, just north of the Galleria mall off the Dallas North Tollway. A few days prior, I placed my order on Instagram. Now I’m in a vast stretch of surface parking under a sign for Bed Bath & Beyond and Nordstrom Rack. I text the details of my car—small, grey Honda Civic—and Sara Hangtagool, the one-woman powerhouse behind Thid Jai, brings out a paper sack. On another occasion, she carries a half-gallon jug of bright orange Thai tea to my car.

Lately, picking up some of city’s best food can have the secret allure of heists. I can’t wait to get home to her khao soi. The aroma tantalizes me on the drive home: I can smell the sultry curry’s coconut and turmeric. When I get to my apartment, I will garnish it. Egg noodles bolster slow-braised beef short ribs and a creamy curry broth. Scattered with pickled mustard greens and chile oil and showered with crunchy fried egg noodles (carefully set aside in their own pouch), it presents a kaleidoscope. The elements marry. It’s stupefyingly good.

Hangtagool launched her home business, Thid Jai, in September. In this time of ingenuity and homebuilt culinary contribution, she is one of many who have picked up a long-held dream and brought it to us, enriching our culinary landscape.

Thid Jai means “addicted" in Thai. How to get your fix:

Follow the link in her Instagram bio to preorder. Pick-ups in Arlington, Irving, Dallas, weekends only. Stay in your car. Look for Thai tea by the half gallon ($10 original/vegan), mee krob ($7 per bag, original/vegan/spicy plus shipping available), and rotating weekly dishes.

She took to Instagram. Her first post, announcing her half-gallons of Thai tea, was lyrical. It speaks of her memories and of comfort. “Growing up, my mom made the best Thai tea in all the land,” it begins. “Creamy, rich, sweet, aromatic, [with] slight hints of vanilla.” The land at this point was Irving. Her mother is from Phetchabun, toward Northern Thailand, but she grew up in Bangkok. Her childhood was spent on the Red Bull factory where Hangtagool’s grandfather worked. Hangtagool’s father also hails from Bangkok. Theirs is a Romeo and Juliet tale that veers happy.

“My mom is […] a big part of why I am who I am today. She gave me my love of food, and for that I am forever grateful,” she wrote in that first post, introducing Thid Jai to the world. 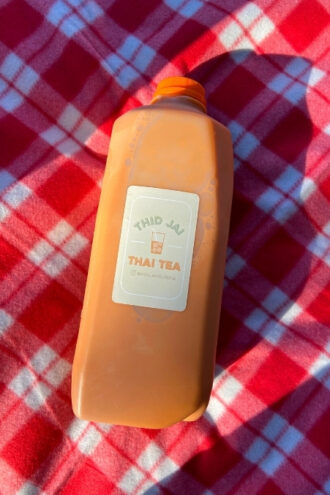 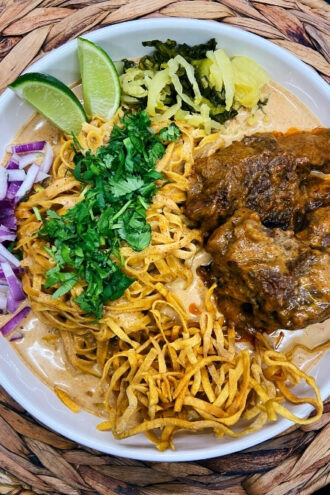 The tea was supposed to fund the rest of a nascent endeavor. By late October, she added mee krob, her mother’s recipe for a snack that, along with the Thai tea, was always available in her household. Crispy vermicelli noodles bask in a savory-sweet sauce. They’ve broken up the usual clumps into something you can eat with a spoon. From the start, the street-style snack was selling out.

Her grandmother, on visits, cooked too: vacuum-sealed chubby, aromatic Northern Thai sausage (sai oua) to accompany with a roasted green chile dip (nam prik noom) and sticky rice. She announced her grandmother was in town: “One of my first memories is of her sitting on the kitchen floor, mixing the sausage filling and watching her stuff the casings with such ease.”

Then came her grandmother’s kanom thom, a sweet morsel filled with caramelized coconut, the glutinous rice dough tinted blue with butterfly pea flower then tossed in freshly grated coconut. Thirty boxes awaited those lucky enough to snag them. I’ve found it hard to find this bite—not even at the stands that typically spread behind the Thai Buddhist Temple of Dallas on Sundays. They appear sporadically, but finding them was still a hopscotch game of haphazardness.

These things are hard to find. That is, in fact, her modus operandi.

“I want to use Thid Jai to educate people as to how diverse Thai food is. To showcase what Thai cuisine is all about,” Hangtagool says. “I wanted to bring something that was authentic and real and also an extension of me and what I grew up eating and loving. There’s such a rich history. Each dish in a culture is a story.”

For her, this was a way to connect to her own mixed culture and identity.

By late November, she was posting dishes for preorder and pickup each week. She began with Panang beef short rib curry.

For these, she pounded the chile paste by hand. For nam tok gai (Thai chicken salad), she fashions the toasted rice powder that gives it its distinctive nutty aroma. Her DIY Valentine’s Day kits leaned traditional, with vacuum-sealed sirloin for crying tiger beef.

She also branches out. She added a tom yum riff to shrimp po’boys with a creamy sauce. She soaks a tres leches cake in her Thai tea, which she steeps overnight. She makes her own coconut condensed milk for a vegan version of the tea that blends in almond milk. This came from requests from friends.

It’s not an easy time to be part of an Asian diaspora in America. With the recent rise in egregious hate crimes targeting Asian Americans in California and elsewhere, the time remains uneasy and fraught. This awareness is intimately tied to Hangtagool’s goals as a business, as a community member, and as an agent of growth and change.

In the flavor melee of any given post, the words beckon and entrance. Her weekly menus come with lessons, both personal and universal. And it really is an education, as well. She kicked that up in February, following January’s waves of aggression, with a longer explanation in her Thai tea post.

Linking to a GoFundMe for Vicha Ratanapakdee, the 84-year-old Bay Area resident who died after being assaulted, is evidence of her stance in a harrowing time.

“That could have been my dad or my grandpa,” she says. “It hits home. You can’t stay silent.”

“I think it’s important just in general to speak up against injustices,” she continues. “If you love our food, you have to love the people, too. I think that’s something that people forget.”

You don’t get to pick and choose. “It’s important to learn about the hurt that other cultures are going through,” she says.

Hangtagool doesn’t plan to sell her prepared entrées forever. She’d like to focus on the mee krob, which was created to address the dearth of Thai snacks—from a whole panoply—by supplying something shelf-stable and shippable. She’d like to focus on sauces, too, to bring Thai food to home kitchens. She imagines a business that would give 10 percent of its profits to charities.

In the meantime, the weekly pick-ups thrive. It is an act of faith, hope, and joy – and grace – dropping lovingly handled food into your car.