Lunar New Year, which falls on Friday, February 12, marks the first new moon of the year and many East Asian cultures celebrate the occasion by eating lots of lucky foods. From plump dumplings that represent prosperity to piles of noodles that signify longevity, these places are hosting fun fetes to ring in another year—one that is hopefully luckier than the last. Happy year of the ox!

The new Greenville Avenue stunner will be decked out in red and gold for Lunar New Year, or Tết as it’s called in Vietnam. From February 12–19, Ngon will celebrate with a special noodle dish from Hanoi, bun thang, filled with vermicelli noodles in chicken broth, alongside dried shrimp floss, shredded chicken, cha lua (Vietnamese-style cured ham), fried egg, pickled daikon, shiitake mushrooms, and Chinese sausage. It’s served with garnishes like fried shallots and fresh citrus—do amp up the flavor with fermented shrimp paste. Aside from noodle soup, Ngon has a lovely swath of Vietnamese dishes on the regular menu, from banh mí with a schmear of cognac pâté to lush crab fried rice.

Ngon will also be giving away gold or red envelopes—lucky envelopes, as they’re also known, are traditional gifts often bearing money during Lunar New Year—which will have Ngon gift cards throughout the week to lucky diners (dine-in and takeout). And on Saturday, February 13, from 5:30 to 6:30 p.m. check out a lion dance performance, another holiday tradition. 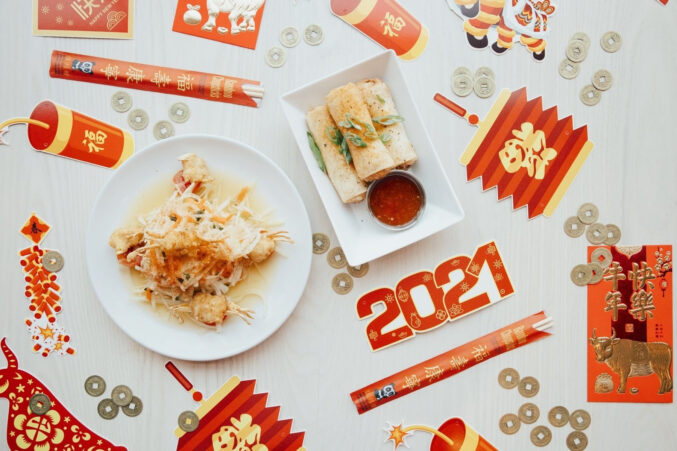 Krio in the Bishop Arts District will celebrate Lunar New Year with a lion dance performance and a pop-up market with vendors outside.
Courtesy Krio

This Bishop Arts District restaurant is hosting its inaugural Lunar New Year, perhaps the first of its kind in the neighborhood. On Saturday, February 13, Krio will have a mini pop-up market featuring Asian-owned vendors, plus a traditional lion dance on the patio. Things kick off with brunch at 11 a.m., then the pop-up from 2 until 6 p.m., with the performance at 3 p.m.

Festivities will be much more low-key this year because of the pandemic, but the Grand Prairie shopping center will still roll out lots of food and entertainment. On February 6 and 7, find plenty of food vendors plus an outdoor double-feature screening of Crouching Tiger, Hidden Dragon and Kung Fu Panda. Everything will happen outside with masking and social distancing enforced. Then on February 13 at 10 a.m., there will be firecrackers and lion and dragon dancing. Stay tuned to the Asia Times Square Facebook page which will live stream the main events.