Encina is Matt Balke’s chef-owned restaurant dream finally coming true. The restaurant takes up the former, and beloved, Bolsa space, a broad corner in the Bishop Arts District, whose ambiance remains airy, light, and subtly rustic. For a number of years, Balke was one of the several executive chefs who helmed the Bolsa kitchen. Now, Encina feels like a happy piece of his mind.

His spirit guides the four-month-old restaurant, which he owns with his partner Corey McCombs. She presides over Encina’s warm hospitality and its considerable beverage program.

Long before Encina opened, he was honing his kind of food: New American, or modern Southern, if you will, or Cali-infused, but with a lightness and dexterity that was all about approaching all of these with a slight spontaneous playfulness. I remember the effect, always, as incredibly memorable, like any food from a chef with his or her own distinctive style.

I’ve been tracking the newcomer’s settling in over these last few months, and everything I’ve tasted has indeed been memorable, distinctive, and vivid.

What does the Southern-New American mean? It means skillet cornbread with local feta and sorghum butter and salmon rillettes with piquillo pepper and orange crème fraîche on house focaccia. Some unfussy roasted trout with warm lentils in vinaigrette with crispy sunchokes. Along with, of course, gastriques. And goat tacos that I would stake my life on.

On New Year’s Eve, the world pummeled by rain, I picked up a shepherd’s pie with hunks of goat meat in a fragrant and aromatic meld of spice and richness under a lid of mashed root vegetables whose robust flavors went Technicolor when I spooned in at home. Meanwhile, the subtlety and richness of a brown butter celery root soup with shaved truffle was all refinement and sultry, creamy comfort at once.

With Balke’s food, there’s always a recognizable farm-to-table touch, but with an infusion of fun that’s all his own.

Appetizers and Salads
Trout and avocado salad, which is a lime-bright jewel $16
The house-cured pastrami $16
Smoked salmon rillettes $13

Entrées
Ricotta gnocchi $24
Short ribs $40
If they have them, goat tacos. Yes, those, as they will change your life.

When the restaurant opened Sundays for brunch in the new year, I ventured out and sat not merely socially distant, but utterly alone on the enclosed patio (granted, I had chosen 10 a.m. deliberately; this was the closest to indoor dining in nine months). The duo has put work into the patio, leveling the floor, and it’s a delight to sit surrounded on all sides by a rucked aluminum ceiling, fairy lights, reclaimed wood’s myriad tones, and wooden and butterscotch-colored leather chairs.

And were those actually butterscotch chips in the moons of blue cornmeal pancakes? They were. With a homesteader’s instinct, Balke had also fashioned cajeta with the last of local dairy Latte Da’s goat’s milk (Bolsa has used the dairy from the beginning, but it was recently sold). That satin caramel sauce joined hands with the tawny butterscotch baking chips’ retro wink.

While he showcases ingredients, adroitness plus spontaneity equals lightness and whimsy.

Meanwhile, there are echoes of the former space in the dishes he makes. I could curl up in the entrée portion of plump, pillowy ricotta in a mushroom broth with peppery fennel sausage and a forest of mushrooms. It gets extra oomph from a pecan gremolata and decadent undertones of pecorino. Subtlety and layers are apparent.

From the flatbread section, which currently belongs in the realm of food that seems preternaturally destined for takeout, you’ll find the Twig, studded with local goat cheese, arugula, and grapes, which has been a stalwart since the earliest Bolsa days. But also a Reuben flatbread, with sauerkraut and house-cured pastrami, provolone, and pickle dressing that encourages you to play it fast and loose. 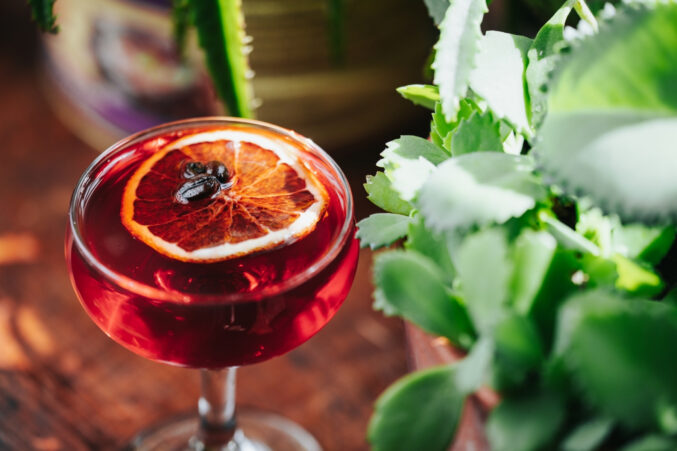 The Reading Wood Black cocktail is bitter-forward—negroni fans, or amari lovers of all stripes, would enjoy this drink before dinner.
Encina

Cocktails, which have always been a strong suit from the Bolsa days and continue to be so, are the work of McCombs. (Have you seen the agave spirit list? Or the txakoli residing on the wine list? You should.)

The couple powered through an evolving pandemic year since their opening in October, with standstills and hurdles.

In its day, Bolsa became a neighborhood fixture by virtue of its communal intimacy. Encina has the potential to do so, and even more so.

It’s a combination of Balke, standing in that open kitchen, backed by the gaping mouth of the wood-fired oven, from which the flatbreads emerge, throwing its heat. And McCombs, standing at the front, extending the kind of front-of-house hospitality that warms in a time when that still means something, even should you only be picking up takeout.

They’ve taken the space and made it their own. I look forward to seeing this signature play out.

First Bite is a new-ish review series on SideDish. In light of the unpredictable and worrisome nature of the COVID-19 pandemic, typical D reviews have been on an indefinite hiatus. The way we dine in, interact with, and experience restaurants has changed. Thus, the way we review has to adapt, too. We’d usually visit multiple times before reporting in-depth analyses on cuisine execution. Instead, we’re delivering instant impressions of new and notable restaurants. While our nit-picking tendencies will be dialed down, our commitment to truth has not wavered.