If you’ve been to a coffee bar in Mexico City, you’ve probably encountered a carajillo. Made from a simple combination of espresso and Licor 43, shaken and poured over ice, it’s a refreshing jolt of caffeine and spice.

Licor 43 is a viscous, golden-hued spirit that you probably wouldn’t want to drink straight. But it adds magic to cocktails with its infusion of 43 different botanicals, including coriander, vanilla, and orange and lemon blossom. Inspired by the ancient Roman elixir Liquor Mirabilis, it was created by the Zamora family in Cartagena, Spain, in 1946. It’s now the bestselling Spanish liqueur in the world, and it’s gaining popularity around the globe thanks in part to its U.S. distribution company, which is based right here in Dallas.

Where to Find a Carajillo in Dallas

Don't feel like breaking out the cocktail shaker? We got you.

José has it on their dessert menu.

Xaman Cafe has three versions on its cocktail menu (one classic, one with “illegal mezcal,” and one with Amaro Montenegro and Averna Amaro).

Las Palmas might not officially have carajillo on the menu, but in the before times, they’d churn out some 40 or 50 of them a night.

Here are three versions of the cocktail that take advantage of the spirit’s affinity for the coffee bean. And if you’re looking for an unusual hostess gift this season, try Licor 43 Horchata, a Spanish-inspired take on Irish cream that is flavored with vanilla, lemon, and tiger nuts (instead of the rice used in Mexican horchata).

Directions: Stir together the hot chocolate, espresso coffee, and Licor 43 Original. Top with a generous helping of whipped cream, and garnish with a raspberry and sprinkling of grated chocolate. 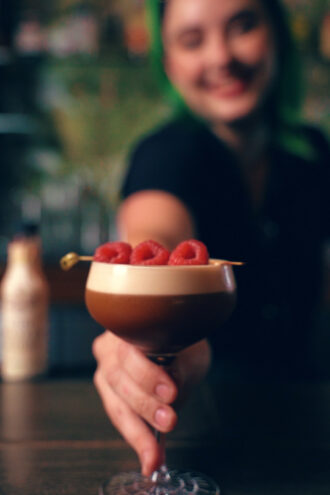 Directions: Add all ingredients to cocktail shaker. Dry shake with no ice, then add ice and shake again–this time long and hard. Fine strain cocktail into a chilled coupe glass. Skewer 3 raspberries, and gently rest them on top of the cocktail’s pillow-like crema. Serve immediately.