In this topsy-turvy year, there was still many a dish that was delightful. I think fondly of the bites that defined this utterly upended year. Coming from all corners of the dining scene, these were absolutely and exactly what we wanted in the midst of everything. Many of them were seasonal or from pop-ups, but these are the morsels I can’t stop thinking about.

The chicken and waffle from Rapscallion—a Belgian waffle, stacked with fried chicken that’s sticky and savory with Szechuan-spiked mala sauce, cream gravy, and a side-kick farm egg—is a reverie from brunch, back before the pandemic, when brunch was eaten in dining rooms, with company.

You can do much, much worse than The Charles’ house-crafted spicy creste de gallo pasta, rosy with paprika and tossed with juicy rock shrimp. The execution is simple-Italian at its finest, a breath of seriously delicious nonchalance.

Among many pickups, I’m still dreaming about the Cambodian pop-up’s box that included a chubby scallion pancake and a turmeric-tinted coconut crêpe, banh chao, vibrant with a zing from house-made chile sauce. They were vegan (from a special vegan menu), full of umami, from a seriously under-represented cuisine, and exactly what I wanted.

Petra and the Beast

Tartines can be trite. Not at Petra and the Beast. Misti Norris made an open-faced cornbread-pudding tartine, with soured broccoli stem-parmesan emulsion, lonza cotto, and a peanut and strawberry vinegar jam, and you’d never seen anything prettier in a to-go box. (Plus, the added intrigue of her whimsical powders and ferments.) I could have eaten it on repeat for a week.

In the height of summer, Donny Sirisavath’s green mango salad was everything you want mid-swelter: flecks of dill, pepitas, the tang of ruby grapefruit—crunchy, funky, and fun. Green mango should make so many more appearances. 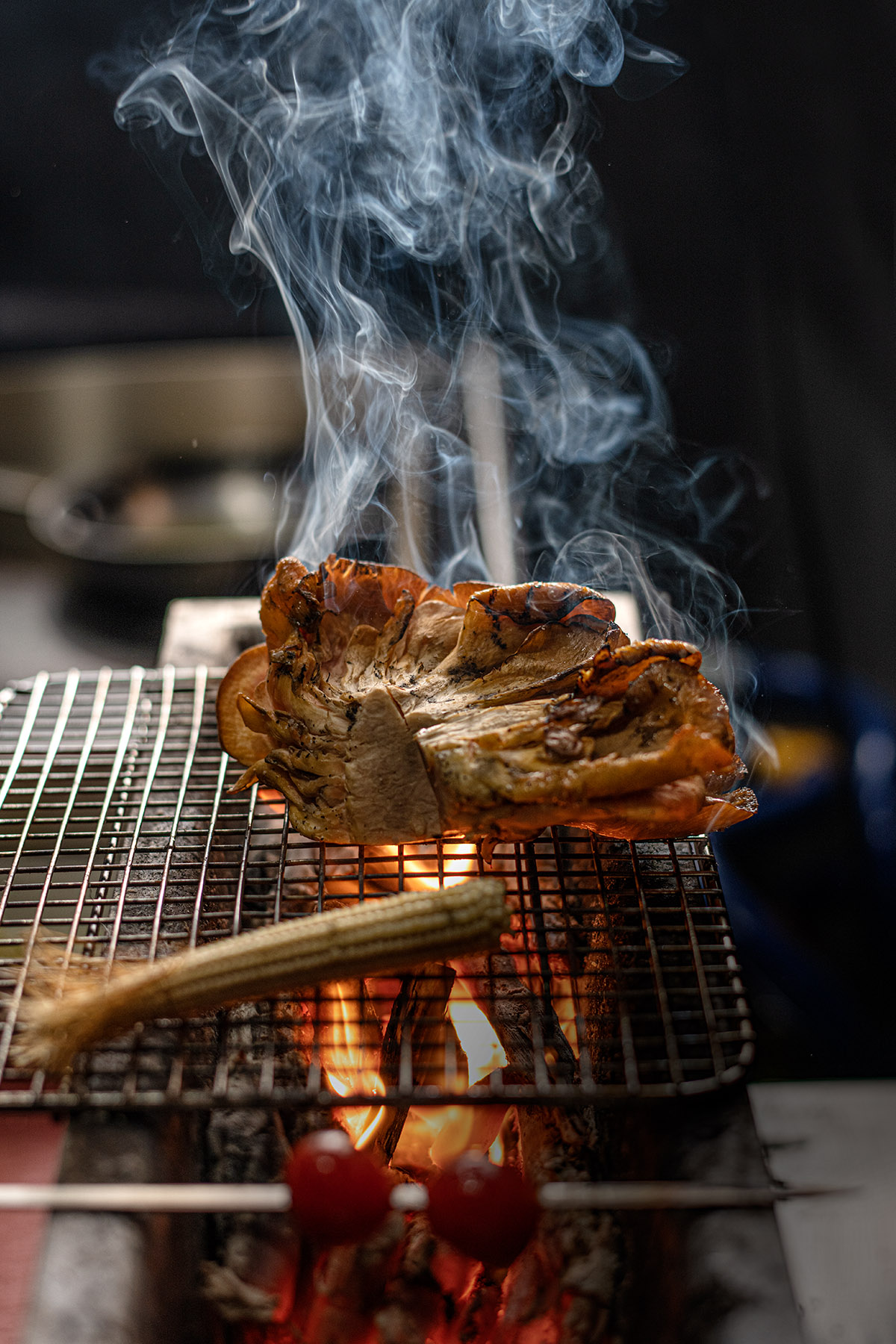 La Resistencia: The binchotan yakitori grill and Rojas’ revolutionary attitude are new, but the techniques of growing and grinding the corn are as ancient as the Maya.
Elizabeth Lavin

Regino Rojas of Revolver Taco set himself the task of grinding heirloom corn, and I was utterly smitten by a pure-white corn tortilla laden with locally grown oyster mushrooms (earthy and meaty, with deep, umami notes). They twined with panela cheese, griddled until the edges turned black and everything about it endeared itself to you—as well as blistered cherry tomatoes and a tiny ear of corn, which brought the corn theme full circle.

Sweets and Savories From Homewood, Bresnan Bread & Pastry, and Girl With Flour

Maggie Huff’s luminous springtime strawberry-buttermilk ice cream—effortlessly refined; Bresnan Bread & Pastry’s strawberry danish, simple and stunning; and Girl With Flour’s extraordinary fougasse, such a fabulous, crackling answer to the question of how to get more crust—(snip-snip-snipped into a leaf shape and studded with olives Provencal herbs, and Maldon sea salt)—were a trio of savory and sweet bites.

During a summer when I went a little coucou over gazpacho—making chilled batches of red or white (with almonds), or rosy salmorejo thickened with bread—one from CBD Provisions was gorgeous. ‘Twas a light, upscale almond gazpacho studded with Jonah crab, red grapes, and cucumber.

Yes, the cochinita pibil is absurdly good. Ismael Sanchez has no business making such a superior version of the stewy dish (whose juices soak through the tortilla), being from Michoacán, not the Yucatán. But try the chile relleno–stuffed taco, which puts a beautifully battered pepper stuffed with panela into a satisfying gestalt of crema and guajillo-morita-tomato salsa, with pomegranate seeds on top for a visual touch.

One brilliant weekend, the women of Bahay, a Filipino pop-up that merged Hella Lumpia with Bilao, popped up with a tocino breakfast burrito, thick with egg, tocino (sweet marinated pork), pico, and rice, cradled in a tortilla. It was the best thing I’d held in my hands in a while.