Those jazzy frogs are one of the first things I noticed on my inaugural drive up Greenville Avenue. I had just arrived in Dallas and wanted to get a feel for the area in which I now lived. I hopped in my Subaru, rambled up Ross Avenue, and hooked a left onto Greenville.

To my left, there it was: a shuttered building, no signage that I can recall, but at the top three anthropomorphic amphibians having a blast. Turns out, they were the last ones to leave the Taco Cabana party when the restaurant closed.

In January, a lifetime ago in 2020 measurements, the Fiesta Restaurant Group announced the closure of 19 Taco Cabana locations, including one that lived on Greenville Avenue for 26 years. I wrote about it in the first-ever News Bites: 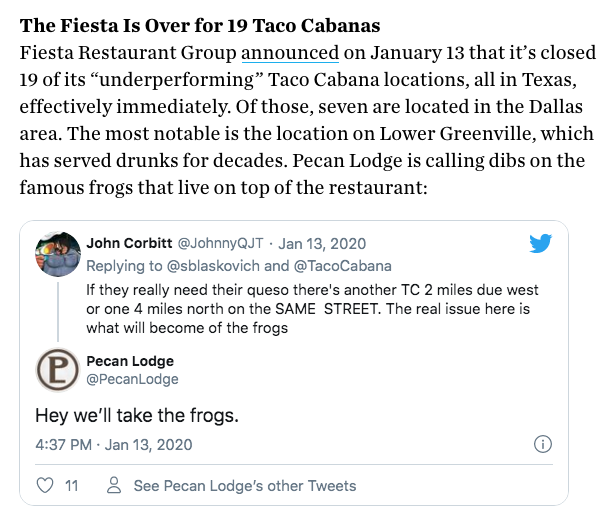 As inquiring minds wanted to know then: but the frogs, what will happen to the frogs? Well, now we know Pecan Lodge didn’t win with their tweeted dibs.

The answer, 11 months later, is that they’re moving into the Truck Yard’s outdoor menagerie.

My history with those frogs is shorter than a line for a communal water fountain in 2020, but of course they’ve been around for decades. We published a Tango Frog timeline back in 2014. Named for nightclub on which they danced, the frogs were commissioned by Shannon Wynne in 1982; Wynne, who owned Tango, had artist and froggy sculptor Bob “Daddy-O” Wade create six lively amphibians—a quirky design choice, but one that gave Dallas some additional funky credibility.

It’s been quite a journey for the iconic frogs. When Wynne closed Tango two years later, the frogs went to Carl’s Corner truck stop near Hillsboro. Three split off to be a part of a roving sculpture tour. The other three survived a fire in 1990, and eventually went to impress other fans of Amphibia.

Then on June 27, 2014, after a 29-year absence, three returned to their original rooftop. It was a full circle tale. With Taco Cabana closed, they’ve traveled again, but not far. The Truck Yard will be their new home, and in a way the Truck Yard and truck stop connection feels kismet, too.

In the famous words of Carl Cornelius, who owned Carl’s Corner truck stop and guardian’d the frogs for years, “People love weird stuff.” They do. And they can appreciate it at the Truck Yard.