When I first show up at the new Nomad headquarters and showroom in Bishop Arts, I am enamored by the wall display of suitcase-shaped portable grills. The blue-accented, perforated aluminum designs would be equally at home in the MoMA gift shop or tucked in the trunk of Steve Jobs’ BMW Z8. But I found my attention quickly diverted by a shirtless figure running across the office hallway.

“We start every meeting with John walking through the office, half naked, scurrying around,” Cam Leggett says, laughing about the state of undress of his Nomad cofounder, John Veatch. “I had to get a fresh shirt!” Veatch shouts from the back room.

That sort of casual and hip, Austin engineer meets O‘ahu surfer vibe is at the core of the collaboration between these longtime friends. Leggett comes from a construction background, mostly custom homebuilding, and Veatch was doing Spanish language multicultural marketing before going to work at the flip-flop company Hari Mari. The two were looking for a venture to start together when they came up with the concept for a portable grill back in the fall of 2016.

“It started with an observation that it was something that doesn’t exist in the market,” Leggett says. “The thought was, let’s build a better portable grill.”

“There’s a lot of schlock out there,” Veatch says. “You walk through the aisles of any major hardware store, even at Barbeques Galore and REI, especially in the portable category, the camp cookers and that sort of thing. They rust and fall apart. They are quasi-disposable, just rattle traps. They sound clunky, and parts fall off, and they’re no longer serviceable—the companies go out of business. They’re just junk.”

“We wanted to make something that was like, what if Apple made a grill, or BMW made a barbecue,” Leggett says. “The proportions of the overall grill are modeled after the golden ratio, which is just pleasing to the eye. We even dorked out about the ergonomics of the handle.” 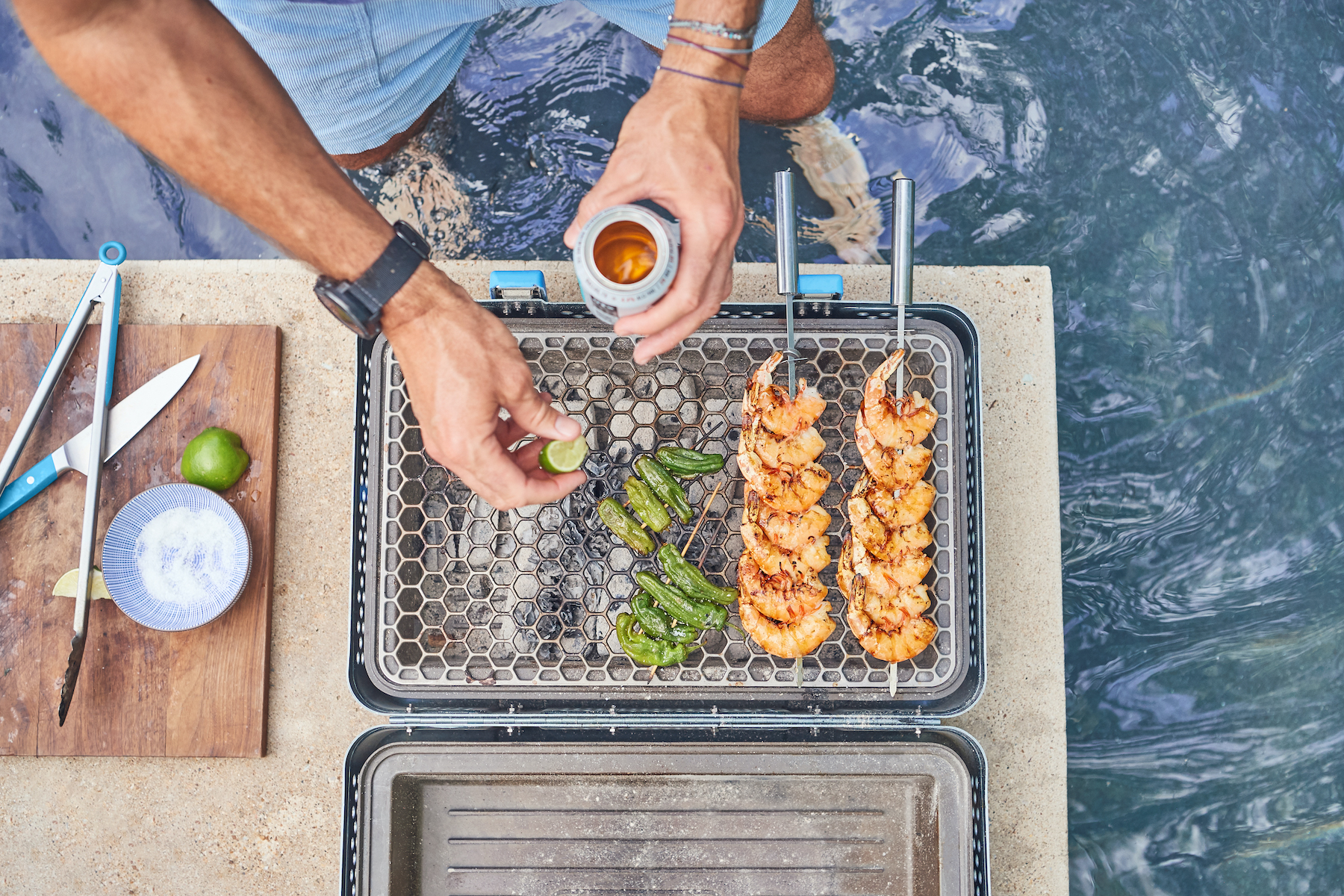 Every detail has been taken into account. Intake dampers on the sides allow for convective airflow. The die-cast aluminum cook box has military spec coating with Type III anodization, and the perforated exterior uses Type II anodization, the same kind used in the same factories as your MacBook. Nothing is painted, so it won’t corrode, peel, bubble or chip. The whole thing weighs 28 pounds.

Even the stainless steal honeycomb cooking grate looks artful and locks into place with a satisfying magnetic snap, which is due to samarium-cobalt magnets that don’t lose their polarity under high heat. Leggett says the grates are so strong you can stand on them. “The honeycomb is nature’s pattern,” he says. “It’s the most efficient way to run a web across a surface. It creates the strongest lattice with the least amount of material.”

Once the grill is open, you can put coals and grates on one or both sides, allowing for more surface space than a Big Green Egg. “We put 30 burgers on it, or we’ve done chicken breasts for a party of 20 people with a single grill, and just throwing it on a wooden table,” Leggett says. “It’s 425 square inches utilizing both sides.” Close it up, and the whole thing can be used like a smoker. The thermometer is removable and can be used as a meat probe. And, in addition to being shaped like a vintage suitcase, the whole thing actually fits in an overhead compartment. Although Leggett says it does raise eyebrows at the TSA.

“We went through some pretty hilarious iterations,” he says. “We spent about a year figuring out what we wanted to do, starting with R&D trips to Japan. We were deeply inspired by Japanese tabletop grills. They have these incredible materials they work with; they use diatomaceous earth as an insulation material.”

But diatomaceous earth ended up being the wrong material, because although it could be shaped and kiln-fired like ceramic, it was too brittle when perforated. “So we kind of went back to the drawing board and pivoted to metal,” Veatch says. “We had this big aha moment where we realized that we could get the same net effect of being able to place it on unconventional or sensitive surfaces if we integrated heat sinks into it.”

The heat sinks are essentially fins built into the exterior of the cook box, like you might see on an engine block. The fins increase the surface area and thereby allow a quicker dissipation of heat. Add to that an air gap and a perforated exterior shell, and you can set the flaming grill directly on your tailgate or picnic table.

“You have plenty of heat just below your food where you’re cooking, but all that excess heat is being shown out the door more efficiently,” Veatch says. “So what happens is, it doesn’t allow the external temperature on the shell itself, the outer casing, to build up. So it typically stays below 140 degrees. That’s the OSHA threshold for a surface burn or contact burn.”

The goal was to build the company slowly and organically, but within two months of their launch in August, they already had a global audience and were shipping orders to Sweden, Germany, London, and Hong Kong. They’re now working with chefs to see how creative they can get with their product. While I’m at the shop, Julian Barsotti fires up a grill on the tailgate of a truck parked out back to demonstrate. He’s cooking gypsy peppers from Comeback Creek Farm, Sungold cherry tomatoes, fairytale eggplant, and red snapper filets. While he flips the vegetables, I dare to place my hand on the side of the grill. It’s hot, but not unbearably so. And the tailgate is none the worse for wear.

Julian says he’s been using the grill both at home and in his restaurant. “At the restaurant, we have a solid fuel oven, and we’ve been taking coals straight from the fire and putting them directly in it,” he says. “It works extraordinarily well.” Now, he’s using Nomad’s custom hexagonal charcoal from Thailand, which Veatch says burns hotter, more evenly, and with less smoke.

When I try the grill at home using the recommended number of charcoal briquettes, I have a hard time getting the grill hot enough to cook a couple of whole red snappers that I’ve stuffed with ginger and herbs. But I happen to have my fire pit going, so I remove the grate and add a hefty dose of burning coals to the grill. I end up moving the fish over the fire pit and try my second course of  lemongrass chicken and oyster mushrooms on the grill. This time it works great. And resting on a gravel patch of my lawn, it ends up doing double duty as a space heater, as my wife and I sit around it, flipping skewers and drinking gin and tonics in the dark.

That’s a value-added proposition in these outdoor, socially distant times. You can’t really gather around a Weber in the same way. I might pack it along on my next trip to Broken Bow, where the provided grills always seem to be propane ones.

“It’s been pretty incredible,” Leggett says of the response they’ve gotten from customers so far. “We already have a global audience and we’re months old. We’re sending these things all over the world. And we did this hacking with metal over a summer in our driveway.”