It’s the season to be thinking of tamales. So think of this dispatch as a tamale cart—or the editorial equivalent of a hot box full of dozens of tamales tucked into the corner of the neighborhood panadería.

We have newcomers and some old favorites with novel things in the works. Empassioned and committed, they’re not trying to outdo anybody’s grandma. They just know that tamales are a powerfully nostalgic food and we’re all yearning for comfort right now. And so they get up in the wee hours of the morning. They soak the husks. They go slowly and taste. They steam with care, so your dreams can be filled with masa.

Keep in mind it’s the holidays, so some offerings may be limited.

A new spot for what’s been a pop-up

John Hernandez was born and raised in a small town outside of Houston. He learned tamale-making from his mother and grandmother, who had opened a TexMex restaurant in 1983. It’s his grandmother—who, it should be noted lived to be 100 years old—who taught him to feel the masa to know it was right and to whom he pays homage with his “Abuela’s” tamale made with ground beef and pork with red chiles. Later, what started as a side-hustle turned into Casa Masa, a roving pop-up with a roster of imaginative flavors that’s now found a semi-permanent home at Encina, the newly opened Bishop Arts restaurant where Hernandez works part-time.

In championing what he considers an undervalued art, Hernandez approaches authenticity with flair. He’s served breakfast tamales stuffed with chorizo and potatoes, crowned with an egg on top. 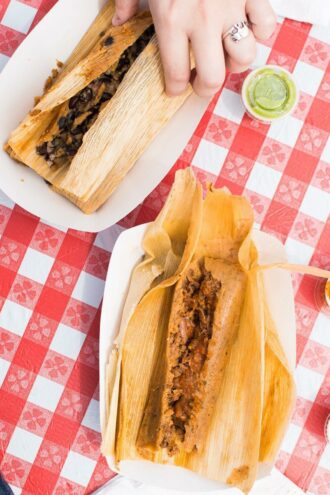 He might fashion a turkey and pasillo chile iteration for Thanksgiving. Slow-roasted pork or smoked brisket go into green chile or ancho chile laced variations. The lard-free, one-person operation includes a variety of vegan and vegetarian recipes developed at friends’ requests that use olive or avocado oil in the masa for parcels of Oaxaca cheese studded with rajas or the mushroom and nopales that’s now popular. Get the “Virtuous Veggie” and it has its own smoky, roasted tomato salsa.

And among the sweet dessert tamales, or rather tamales dulces, is a pink (bright pink!) tamale with strawberry and coconut masa. He fills it with golden raisins, dried cranberries, pecans, plantains, and pineapple, and calls it the “piñata,” a riff on the traditional rosy-hued, strawberry-in-name-only ones he ate at friends’ homes growing up. “To me, it’s almost like a fruit cake,” he says.

His chocolate brownie tamale involves masa touched with cocoa and sugar and a brownie filling that’s like eating chunks out of chocolate-brownie ice cream. But his favorite is apple-pecan: a filling of baked apples snuggled down with cinnamon and sugar. When you put it on a comal griddle to crisp, then grace it with a scoop of vanilla ice cream, it tastes like apple pie.

As for everything else, he says, “I just do it exactly the way my grandmother taught me.”

How to get them: Look for Casa Masa on Instagram. Preorders will be taken Sunday-Thursday for pick-up at Encina on Sundays. Also look for salsas, ranchero beans, and quesos.

New digs for an established business—now with horchata and demo videos on Instagram.

The Tamale Company began with a trio during the 2008 recession: Liz Plimmer-Fernandez, husband Israel Fernandez, and father Richard Plimmer. Of the trio, Plimmer-Fernandez was the only one with culinary-school credentials. (In fact, her father’s fledgling tamale business became her internship-turned-job 12 years ago.) The company grew organically, from a tamale cart for catering birthdays and weddings (purchased off Craigslist) to online sales and shipping. During the pandemic, the team turned the catering-storefront-and-office (now decidedly not catering for gatherings) in a shopping center into an airy grab-and-go shop called The Bodega that enlivens its corner of Duncanville.

The Bodega includes new staples, like elotes, adobo chicken salad, and the jars of exquisite mole her mother-in-law hand-crafts once a week.

The five core tamale flavors have stayed the same: shredded chicken with tomatillo and jalapeño; ancho chile–spiced beef tenderloin or pork; a cheese blend with jalapeño and poblano; or smooth black bean and corn. They use only shredded meats and aim for balance in every bite. “The key to good tamales is consistent proportions,” Plimmer-Fernandez insists.

A Few Other Tamale Favorites

At the Dallas Tortilla and Tamale Factory, the vegetarian tamales are on hiatus, but everything else is order-able.

And if ever there were a tamale to start a swoon it’s the one from Along Came Tamale that’s thick with blueberries. Dessert tamales from the sweet-focused company also include apple, chocolate chip, cinnamon raisin, and pineapple.

Seasonal pumpkin pie tamales, like a holiday dessert in tamale form, enfold pumpkin and cream cheese, their masa sweetened with sugar and spiked with cinnamon. Slip them out of their husk. Fry them in butter to achieve a decadent crust. Drizzle with cajeta and top with whipped cream for the full effect. Plimmer-Fernandez has even pressed this pie-flavored morsel in a waffle iron for an all-around, crust-like, crunchy exterior.

Another favorite, the “gringa” tamale—a tamale wrapped in a lacy, golden blanket of fried cheese—debuted the week before Día de los Muertos at a pop-up and instantly gained a cult following. Plimmer-Fernandez is planning to release an Instagram video demonstrating how to make it at home. As in: “Here is the video, here are tamales, DIY folks.”

She also elaborates on horchata, having invested time and equipment into crafting the creamy staple. High-quality rice, which soaks overnight; a machine for almond milk that grinds and strains the almonds. “I thought it was an easy drink. It’s not.” Variations on the recipe include a cozy pumpkin pie horchata and a light lavender, her favorite. She’s working on an Abuelita’s chocolate. A coconut one is vegan. The others use condensed milk. So, come for the tamales, stay for the mole and lavender horchata. They’re also currently taking preorders for Thanksgiving sides , including everything from chile-spiced pecan sweet potatoes, Brussels sprouts with soy chorizo, and corn tortilla-based quiches.

How to get them: Order from The Tamale Company online. Or visit The Bodega at 626 S. Cedar Ridge Dr., Duncanville.

The week before Dia de los Muertos also marked the debut of the newest addition to the tamale scene. YesYes Tamales is the brainchild of Yesenia Lopez, who is named after a ’70s Mexican soap-opera character and whose tamales are both authentic and utterly of the moment.

A former service industry worker, her online-order, virtual business shows her willingness to expand into this COVID-19 cultural moment, this year of artisan-to-door delivery. Forget the tamale cart you wait in line for hours for. She wants to be your modern tamale lady. You text or DM in advance and a box cradling hot morsels arrives at your door. They’re small packets with big flavors—four of them so far.

It’s with her mother that she learned the craft when she was 11 years old: She started by cleaning the husks, cutting them all to be the same shape. She insists on the architecture of a well-made tamale. Then keeping an eye on the pot so they didn’t overcook. Finally learning to make the chile paste—a purée of boiled, deseeded peppers—that gives the masa a gorgeous, reddish tint (and also enhances the corn’s sweet flavor).

Her masa is on the fluffy side. For this, she doesn’t feel but listens to the masa as it slaps in the mixer.

Lopez was until recently vegetarian, and so the traditional queso fresco and poblano pepper or black bean tamales are simple but stunning. It’s the latter she would crisp up as a snack as a kid, in the oven or in a skillet, to get a crunchy exterior and a steamy, soft inside.

Guajillo pepper and garlic go in for the pork; a bright chile verde of tomatillos, cilantro, serranos, and jalapeños for the chicken. She doesn’t put chile in the masa for that one. She’s flirting with the idea of adding brisket—because, Texas—and might do an Abuelita chocolate tamale as an added flavor or feature. For now, she’s starting small.

Put on Your Thanksgiving Pants