Three years ago, chefs from all over Texas kept asking the Austin Food and Wine Alliance about when they’d come to their cities. The nonprofit, known for its grant programs and annual food events, has planned to expand into Texas’ major food cities since it launched. Now, it’s evolved into the Texas Food and Wine Alliance, an umbrella nonprofit with new branches in Dallas, Houston, and San Antonio (in addition to the original Austin arm).

Announcing the expansion during a pandemic isn’t quite how the team envisioned it, says Brandon Watson, communications director for TFWA. “The support we’ve gotten from chefs and the culinary community is overwhelmingly positive and we’re just so excited to be able to do some do some good in these cities, particularly because of the pandemic that help is needed more than ever—people people are struggling and we definitely can help with that post-pandemic recovery.”

It will take years, but with a Dallas Food and Wine Alliance here, the city’s food industry has a better chance of bouncing back. The organization has given more than $14,000 for immediate aid and pandemic recovery this year, and nearly $337,000 in grant funding to Central Texas’ culinary community.

“Traditionally we give grants to small businesses, artisan businesses, food-related nonprofits that show some sort of innovation, and that can be anything from sustainability to community give-back projects,” says Watson.

That criteria will more or less remain the same, but given how much food businesses and restaurants have stepped up among COVID-induced woes, the TFWA will have a lot to consider.

“Even though everyone is hurting there are just gobs of collaboration and cool ideas,” says Watson. “I don’t know that I’ve ever seen so much innovation in the hospitality world… It’s gobsmacking and amazing. Even in the midst of such pressures, people are coming up with cool ways to not only just survive but give back to the community.” The Dallas Food and Wine Alliance, come 2021, will be a great way for those innovative groups to continue their good deeds. 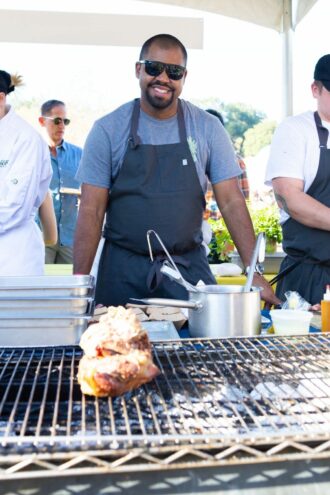 “It’s an incredible organization that I have had the pleasure to participate in its events in the past and I’m really excited to be involved in its formation in Dallas,” says chef Junior Borges, who’s preparing to open the forthcoming Meridian restaurant. “I believe having an Alliance that will bring our community even closer would be awesome. The more we can come together and provide assistance and help for those in need it will only make us stronger.”

Outside of grants, much of what the alliance does is events-based, like food festivals and fundraisers. Like so much else this year, large gatherings just aren’t happening. In lieu of in-person, the organization has a lineup of virtual events.

They’re launching a new cooking series called the Alliance Academy on September 17. It’ll feature an assortment of Texas artisans and chefs from restaurants like the acclaimed Comedor, and Homewood chef Matt McAllister is already slated for the second season of Alliance Academy. Watson says Katherine Clapner of Dude, Sweet Chocolate is also among the roster of Dallas folks they’ve enlisted for other chef-focused online events. (Petra and the Best chef Misti Norris is a hopeful of theirs too.)

They’ve partnered with Austin’s Assembly Kitchen to send out meal kits for each cooking class; they’ll ship almost everything you need (sans, say, alcohol) straight to you. First up is Nixta Taqueria.

By the time 2021 rolls around, though, Watson and the whole TFWA crew are hopeful they’ll be able to really expand their outreach in Dallas with chefs, venues, and more as they get some in-person events on the books when the time is right.

Scenes from the Dallas Chocolate Festival