When we first wrote about Sandoitchi, the Deep Ellum pop-up was already selling out its Japanese sandwiches at a feverish pace. I managed to snag a few sandos before official cult status set in and haven’t bit into chicken katsu surrounded by fluffy milk bread since.

Then about two weeks ago, Sandoitchi announced it would no longer sling sando out of Niwa Japanese BBQ’s space but instead decamp to Orange County and run a temporary pop-up in California. Ipso facto, celebrity cookbook author and all around sandwich aficionado Chrissy Teigen got hip to the chef Stevie Nguyen’s mega-popular and sought-after sandos.

She posted about the meeting on social media. The culinary mind behind Sandoitchi, Stevie Nguyen, taught Teigen’s husband John Legend how to make his Japanese egg sandwich. What’s in between those improbably pillowy bread slices, you wonder? Egg salad, creamy and lush, with the finesse of egg cooked three (!) different ways. Teigen teased that the cooking lesson will appear on her Cravings recipe website. 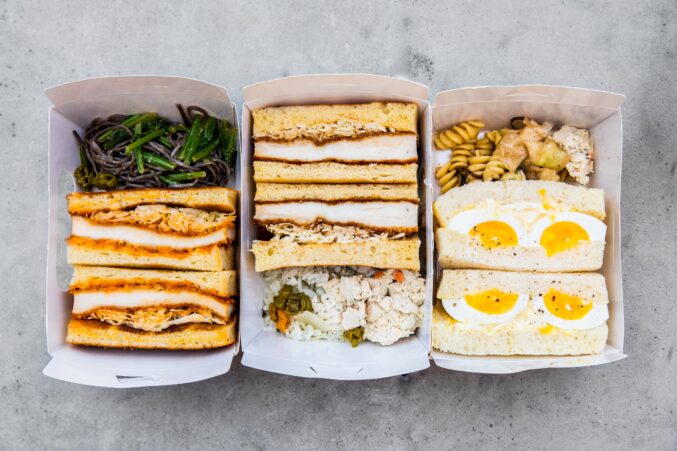 For the katsu, Nguyen bathes chicken cutlets overnight in a wet shio koji solution adds an umami secret weapon, almost like using miso or salt in a brine. In the fruit and cream, a lightly sweetened Chantilly hugs strawberries and kiwi.

And if you’re getting nervous that Sandoitchi has left Dallas for good, the pop-up promises to return to DFW someday soon.

The guys from sando itchi taught john how to make some of their famous Japanese egg sandwiches. So fluffy 😩🙏🏼🥰 bedside delivery! pic.twitter.com/0PYqEjlfb4

Far left, there’s Stevie Nguyen and next to him his operations manager Keith Tran.