Pandemic be damned, the flavors of the State Fair of Texas will triumph. Nothing will quite compare to actually going to Fair Park and spending a whole day eating all the foods on sticks—skewers, a Fletcher’s corny dog, a turkey leg from Smokey John’s. But a host of pop-ups, fair-themed menus, meal kits, and more are determined to at least deliver on some of what so many love most about the annual event.

So here’s a round up of places giving us a taste of the State Fair.

The State Fair that you know and love can’t return in full force. But it will open for “drive-thru picnics” allowing 50,000 cars (less than 5 percent of the usual crowds) to drive through the fairgrounds and pick up a Fletcher’s corny dog and other fair foods like Smokey John’s smoked turkey legs. Man, I love hand-held foods. A drive-thru picnic is when you pick up your food and eat somewhere else, in your car, or as a socially distanced picnic. The logistics of this whole operation sounds like an interesting challenge, but best of luck! Oh, you can also still get your yearly picture with Big Tex, which, it seems, is way better than one with Santa Claus. Visit the State Fair website for more details.

While you can find these at Fair Park when the aforementioned drive-thru opens, the Fletcher’s folks have been popping up around North Texas all summer. And they’ll continue to do so through the rest of the year. When the State Fair of Texas had previously announced it would be canceled this year, we thought we’d miss out on many a beloved fried food. But the coronavirus isn’t stopping Fletcher’s Original Corny Dogs—the State Fair institution that it is—from sharing their breaded-and-fried treat with Dallas. Check out its lineup of events for this month include stops in Arlington, Lewisville, and various breweries around Dallas. 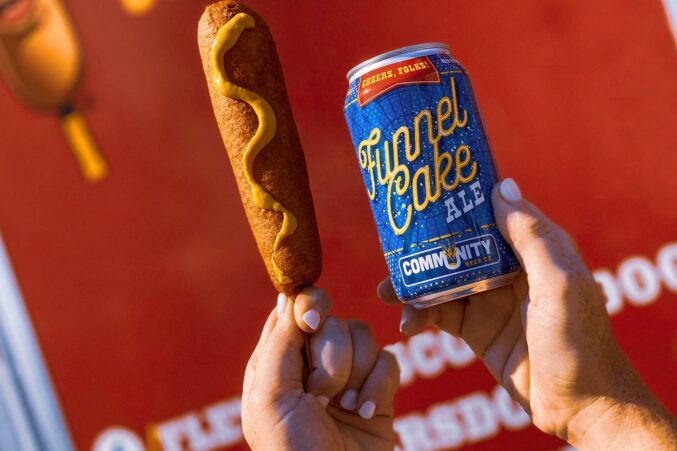 Yes. Community Ale re-released their Funnel Cake ale—because they can! The Dallas brewery teamed up with the folks at Fletcher’s for a to-go only taproom debut over the weekend. If you missed it, there is still a small amount of four-packs left (curbside is open from noon to 7 p.m.) and look out for a wider release at select Texas stores soon.

CornDog With No Name
When family members of the Fletcher dynasty decided to spin off their own corn dog operation, things got a little controversial. Jace Fletcher Christensen and her mother Victoria Fletcher opened CornDog With No Name amid a lawsuit from Fletcher’s Corny Dogs, a longstanding State Fair of Texas staple—one that her grandfather Skip Fletcher ran for decades. But Christensen’s pop-up-turned-restaurant also serves corn dogs (hold the “y”) with a decidedly gourmet bent. Anyway, CornDog With No Name it is! The best way to track where to find these gourmet dogs is through the CornDog With No Name Instagram. On September 21, they’ll be at Martin House Brewing for a Bloody Mary Pickle beer release.

Corn Dog Smoked Ale
That’s right. More food-flavored beer. Revolver Brewing calls it everybody’s favorite food on a stick in can: The Amazing Corn Dog Smoked Ale, which is available at Kroger, Tom Thumb, and WalMarts in the DFW area for a short time. Get it while supplies last—mustard optional.

Haywire, Ida Claire, and the Ranch at Las Colinas—three eateries under the Front Burner group—are running State Fair fare specials in the form of meal kits. Both the Ranch at Las Colinas and Haywire’s country-fried, mesquite-smoked ribs kit feeds four for $65 and includes Texas whiskey barbecue sauce, mac and cheese, slaw, grilled cheddar jalapeño sausage, and cornbread. Add Oreo-fried pies for five bucks. At Ida Claire’s, the Southern fare kit feeds four for $40 and includes andouille sausage corn dogs, grilled corn, beignets, and red beans and rice. Add peach cobbler waffle cones with bourbon buttercream for $5. Legacy Hall is joining in on the festivities with fair-inspired items available at two of its food stalls. Son of a Butcher will offer a funnel cake milkshake, and Brisket Love will have smoked turkey legs!

Norma’s will have a special menu dedicated to the formerly canceled, but now sort of back on State Fair that will run through October. The menu features fried favorites like mini corn dogs, funnel cake fries, chili cheese tots, funnel cakes, chicken fried steak, deep-fried Oreo churros, and other State Fair-adjacent classics like bacon mac and cheeseburgers, sausage on a stick, and Belgian waffles. Norma’s is also looking to help out the organizations affected by the cancellation by helping to raise money for United Way of Metropolitan Dallas and The Big Tex Youth Livestock Auction & Scholarship Program.

Okay, I found some late additions which will put us over six. But consider these bonus options the proverbial cherry on top of the State Fair flavor pie.

Move Over Steak Fries
At Knife, chef John Tesar serves creamy avocado fries with a cooling but zesty chipotle mayonnaise. In his cookbook, Knife, Tesar talks about the fried morsels: “The inspiration came just after I moved to Texas, from a booth frying half avocados at the Texas State Fair. As soon as I saw them, I said to myself, If I ever own a steakhouse, I will put avocado fries on the menu.”

Red Hot Corn Dogs
Get Luscher’s Red Hots in heavenly corn dog form: breaded, fried, delivered—it’s yours! Jaxon is channeling its State Fair spirit with their Luscher’s Red Hot corn dogs. Enjoy it on the downtown restaurant’s patio, or get one via curbside pickup or delivery through Caviar.